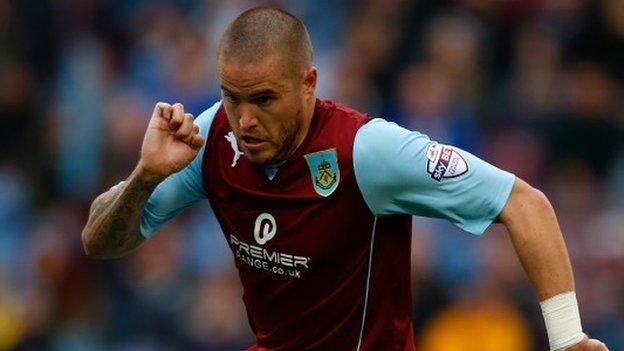 Burnley lost ground on the top two in the Championship as they were held to a goalless draw by Brighton.

Michael Kightly hit the post for the Clarets in the first half after a clever corner routine.

Brighton midfielder Jake Forster-Caskey then headed the ball off his own post in the second half from David Jones's free-kick.

Andrea Orlandi had the chance to win the game for the visitors but Tom Heaton kept his close-range shot out.

The Clarets are unbeaten at home in the league since March but are now three points off QPR and 11 behind leaders Leicester.

Their first big chance came when Kightly played a short corner to Danny Ings, who backheeled it to him before the winger hit the base of the post from an angle.

Visiting keeper Tomasz Kuszczak saved a Vokes header on the line and Jones's free-kick was diverted onto the post by the Seagulls' Forster-Caskey.

Brighton almost won it when Heaton denied Orlandi and Burnley's Ashley Barnes then put an overhead kick wide against his old side.

"We are that surprise package and that can be favourable to us. We have got a team who play without that feeling that them other clubs have got because there is that demand on those clubs to get the job done.

"Ours is slightly different - we have our own expectation, of course - but the outside expectation is lesser so on Burnley than them boys who are up there now."

"I don't think we were defensive-minded in any way. We never set up to defend and to just get a point. We came here to win the game.

"Credit to them, they put long balls in, put us on the back foot with aerial play so we had to defend well and we defended fantastically well.

"Ironically, we had a great chance at the end to take all three points but, I'm being brutally honest, that would have been slightly harsh on Burnley."