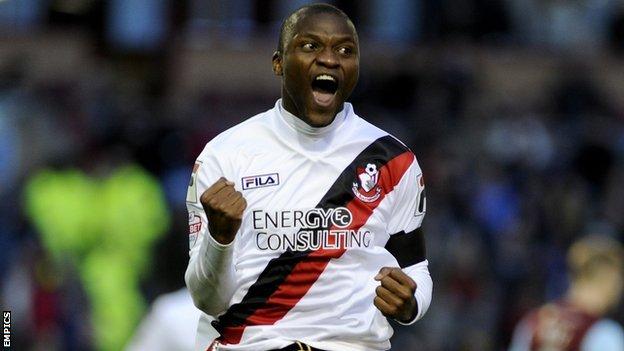 Bournemouth's record signing Tokelo Rantie came off the bench to score only his second goal for the club as they beat Huddersfield Town.

There were no goals in the first half on a waterlogged pitch, but the rain stopped and the goals came after the break.

Lewis Grabban put the Cherries ahead with a penalty before Calum Woods equalised from Nahki Wells's pass.

But substitute Rantie secured victory with a shot that went in off the post.

It was the 23-year-old's first home goal since his August move from Malmo for a reported £2.5m, and only his second in 19 games.

With the game seemingly under threat of abandonment in the heavy rain, it was a poor first half, though Bournemouth had chances to score.

The game got going after the break, and the deadlock was broken after Tom Smith brought down Marc Pugh in the box, with Grabban firing home.

That lead lasted only four minutes as Wells pierced the Cherries defence with a ball that Woods raced onto and fired high into the net.

Rantie, on for midfielder Andrew Surman, scored the winner within three minutes of his introduction when Eunan O'Kane set him up for a right-footed effort.

The Terriers pushed for an equaliser and almost found it in stoppage time, but Ward squandered the chance.

"It was a great moment for TK and I am so pleased for him. I know he has struggled for goals since he came to us but I have had absolutely no doubts about his ability. I know what he can bring to the team.

"It was a question of him adapting to a new country, to the English game, to new team-mates and how we play. He is still doing that and we always knew it would take him time to settle and fulfil his great potential.

"Some of our supporters began to think we had made a mistake, but we have not. I just hope he scores many more like that because when he came on he was razor-sharp."

"I am disappointed with the result. Our away from has not been good enough and we have to start picking up points on our travels.

"The rain made it difficult to play good football but overall I thought we had done enough to earn a draw, but not enough to have won.

"We played against a good footballing side who provide a lot of movement and are a different team to the one we beat 5-1 back in August. In the end we cannot get away from the fact that we were bare up top without [James] Vaughan."