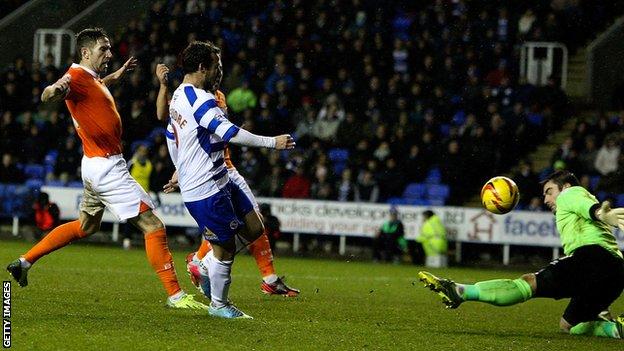 The striker scored twice in a 10-minute spell in the first half, volleying in the opener before nodding in a second.

After a blistering start to the season that saw them top the Championship table in September, Blackpool have failed to win a game since November.

That poor run of form resulted in the dismissal of Paul Ince last week and his son Tom, who appears set for a move to the Premier League, was absent from the Blackpool squad at the Madejski stadium.

Reading beat Bolton 7-1 in their last home game, with Le Fondre scoring a hat-trick and the former Rotherham striker was once again in lethal form.

He took just seven minutes to open the scoring when Garath McCleary's cross took a wicked deflection and Le Fondre reacted instinctively to volley in.

Le Fondre continued to cause Blackpool problems and, after shooting wide from another McCleary ball, he scored a second.

McAnuff was denied by goalkeeper Matt Gilks after racing through as Reading continued to press, and a third arrived soon after the break.

Kaspars Gorkss's header found Le Fondre, who in turn released Pogrebnyak and the Russian beat Gilks with a low effort.

Davies rifled in from 30 yards for Blackpool just after the hour but it was only a brief moment of relief as Le Fondre dinked over Gilks to complete his hat-trick.

Substitute Robson-Kanu then fired in from outside the area late on as sixth-place Reading sealed a victory that moves them four points clear of Ipswich.

"Adam's three goals were just exceptional. It was a good team performance all round and there was a good level of consistency.

"A lot of that is down to being able to pick the same team for four matches in a row for the first time since I've been here. So it's no great surprise that we're now becoming more consistent.

"We've had a lot of players injured for a long period of time but we've got a good group of lads who are having a right go for each other. It bodes well for the remainder of the season."

"I don't think you can play, captain and manage. I think it's better for me to take the team from the sidelines.

"I've still yet to find out what my situation is going to be. I don't know at the moment.

"It's a tough job management, in general, but apart from the result tonight, I really enjoyed it."