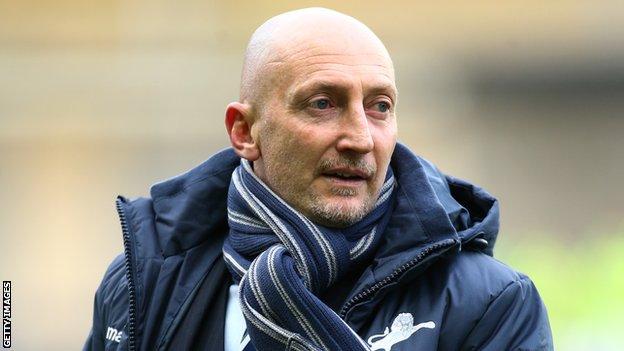 DJ Campbell scored on his Millwall debut to gain a draw against Sheffield Wednesday, in a feisty match which ended with both sides having 10 men.

The deadlock was broken between the Championship strugglers when Giles Coke dribbled through the Lions defence.

Campbell levelled with 10 minutes left as the Blackburn loanee followed in after Warren Feeney hit the post.

Coke and Shane Lowry were both sent off for fighting soon after, with neither side then able to force a winner.

Wednesday came into the match boosted by the decision to name Stuart Gray as permanent head coach after a run of four wins and three draws had moved them two points clear of the relegation zone.

Millwall, in contrast, had celebrated their first win in eight matches when they were last in action on 18 January against Ipswich.

Despite the visitors' superior form, Millwall should have gone ahead in only the third minute but Lee Martin could not get his shot away after being slipped in by Andy Keogh. A weak Danny Shittu header and sharp save from Steve Morison followed as the hosts excelled in the first half without forcing the breakthrough.

Ian Holloway's side continued to dominate after the break, but went behind against the run of play shortly before the hour mark when substitute Coke made an excellent run which finished with him rounding goalkeeper Stephen Bywater to score into an open goal.

Wednesday went close to an unlikely second soon after as Miguel Llera headed against the crossbar.

Millwall's overall superiority was rewarded as Campbell equalised late on, in a move which saw referee Lee Probert allow play to continue with Morison down clutching his head in the six-yard box.

Probert came to the fore again minutes later when Coke and Lowry were dismissed for a scrap by the corner flag, in a heated incident which saw both sets of players rush in to separate the pair.

Eight minutes of injury followed, but after Kirkland blocked another Campbell effort with his chest well out of his area neither side could secure all three points.

"I saw a little bit of nervousness which is understandable because of what has happened this season.

"I saw a lack of understanding which comes from the team structure and team mentality and because they played with a different shape to what they have in the last four or five games.

"Unfortunately the way things are going we went one down but I was delighted because the spirit we have been talking about came, the togetherness came and we got excited about what we were doing."

"You go 1-0 up at a difficult place, Ian's second home game and they are working their socks off and the crowd are responding and the players are responding to him, but we weather the storm.

"It wasn't a smash and grab, we had some decent chances and after Coke goes round their keeper and slots it in I am sat here talking about two points lost really.

"I am disappointed with the goal. Millwall were still in possession so there was no need for them to kick it out but I just felt the lad was interfering with Kirkland."