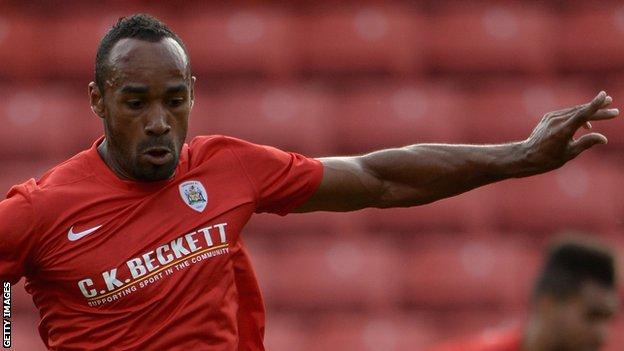 The hosts took the lead through debutant Nick Proschwitz, but goals from Tom Cairney and Rudy Gestede meant they trailed at the break.

O'Grady levelled matters from the spot after Liam Lawrence was brought down in the box by Grant Hanley.

And Rovers suffered a further setback when midfielder Lee Williamson was carried off on a stretcher.

Blackburn started the brighter and Tykes goalkeeper Luke Steele had to be alert to keep out Cairney, Gestede and Jordan Rhodes before Proschwitz opened the scoring at the other end.

The Hull loanee fired past Rovers goalkeeper Paul Robinson having earlier been denied by the former England international.

Cairney's superb 25-yard effort brought the visitors back level before Gestede put them in front on the stroke of half-time after good work from David Dunn.

But Barnsley manager Danny Wilson introduced midfielders Lawrence and Tomasz Cywka in the 62nd minute, and it was the former who won the penalty for the equaliser as Hanley bundled him over.

O'Grady sent Robinson the wrong way from the spot to salvage a draw for the hosts, with Williamson leaving the field soon after following lengthy treatment.

"I am happy with a point because to go behind against a quality side like Blackburn and fight back like we did.

"In the first half they gave us a lesson. They passed us to death at times and we didn't get to grips with it at all.

"They picked up the ball in midfield and played through us. Getting them in at half-time was a bonus from my point of view at only being a goal down. We got away with it. We have to be honest."

"The [penalty] decision is not acceptable. It cannot be. Jordan Rhodes gets flattened in the penalty box. I spoke to the referee but it didn't make me feel any better.

"You should be talking about how well we played, especially in the first half. We were outstanding.

"Their goal came against the run of play but we didn't panic. We just kept playing the way we play and scored two very good goals."