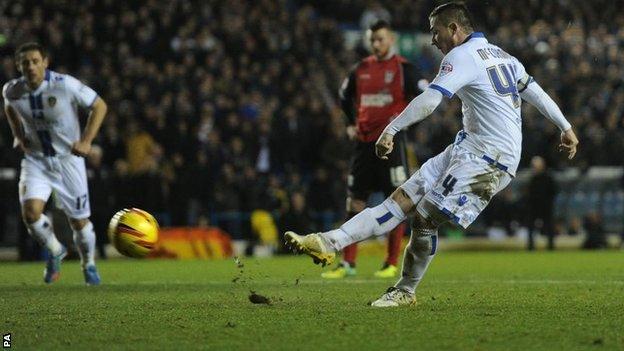 Leeds turned down a reported bid of for captain McCormack last week and he ended a five-match losing streak with his 19th goal of the season.

David McGoldrick's long-range shot had given Ipswich, who are a place outside the play-offs, the lead.

But McCormack levelled from the spot after Cameron Stewart was fouled.

Ipswich were the better side in the first half, with McGoldrick slicing wide when clean through, and then seeing a shot cleared off the line by Jason Pearce.

With their fans becoming more and more frustrated, Leeds needed a spark of inspiration but their best effort saw Stewart cut in from the left to shoot wide.

McGoldrick did score after the break when he beat Paddy Kenny at his near post from wide out on the left wing,

But Leeds responded and when Stewart was brought down by Ipswich captain Luke Chambers, McCormack blasted the penalty home.

"It is tough at the moment, on and off the pitch. We don't want any negativity and we have to stay as positive as we can.

"I never make excuses for results and we did come from behind for a point, but the preparation for this match was very difficult.

"I am desperate to see an end to uncertainty over the ownership situation. It is all about the stability of the club going forward and we need the right people in place at the top. This is probably one of the most difficult spells I've had as a manager."

"We had enough opportunities to win the match and we were on top when we scored. It is frustrating because we went ahead and then Stewart and McCormack did their jobs.

"I couldn't see whether it was a penalty or not on my monitor. Chambo says he never touched him but every penalty I conceded as a player was never a penalty.

"To be fair, when you slide into a tackle inside the box you give the ref an opportunity."