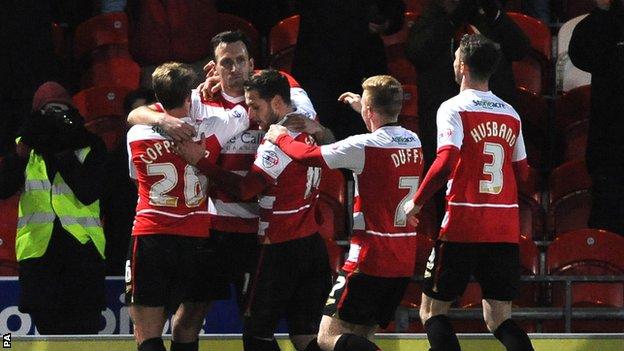 Rovers were already a goal up thanks to Abdoulaye Meite's tap-in when Addicks full-back Lawrie Wilson was dismissed after conceding a first-half penalty.

Chris Brown doubled his side's lead from the subsequent spot-kick.

And struggling Charlton's defeat was sealed when the outstanding Mark Duffy curled in after the break.

Charlton have won only one of their past 10 games in the Championship, losing five

The result means Chris Powell's side, who remain in the bottom three, are without a league win in 2014. Doncaster, meanwhile, have taken seven points from their past three matches.

Rovers' superior form was apparent in a crucial 10-minute spell which began with defender Meite scrambling home his first goal for Paul Dickov's side after Ben Alnwick saved from Duffy.

And the match soon slipped away from the Addicks as Wilson was sent off for upending Billy Sharp from behind in the box, with Brown sending Alnwick the wrong way from 12 yards.

Rovers were already firmly in control by the time Duffy's measured strike from just inside the area sealed a victory that saw them continue their climb away from danger.

"I thought for the first 30 to 35 minutes we were fantastic, but I had a go at them at half-time as I thought the last 10 minutes were really sloppy and we dropped our standards.

"We were showboating a little bit - we are at our best when we play two-touch and at a high tempo. Second half I thought we were better, but there were times when our all retention wasn't great. But it's another three points and a big three points.

"That was massive - it doesn't take a rocket scientist, but if you keep a clean sheet then you're going to pick up at least a point and I thought defensively we were solid."

"Doncaster were on it from the start and we didn't get going at all. When we went a goal down, then 2-0 down with a man sent off, it was going to be a long road for us.

"We have some tough games recently and although we huffed and puffed, we just never got ourselves going.

"I think most referees in that position would have given it [the penalty]. I don't think Lawrie got the ball and he had a decision to make and he made it."+