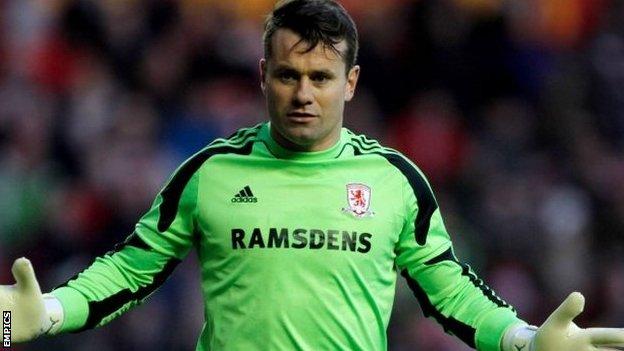 Middlesbrough kept a fourth straight clean sheet at home for the first time in over a decade but that was the only notable aspect of an unremarkable match against Wigan.

Chris McCann went close for Wigan when his stabbed shot was deflected wide.

Stephen Crainey then drew the save of the match from Shay Given, who made a one-handed stop to prevent his 20-yard strike from finding the net.

Curtis Main had Boro's best chance when he scooped over from eight yards.

The Latics, seven points off the play-offs but with two games in hand on some of their rivals, were first to show when Ben Watson curled to the back-post where McCann's effort was charged down.

They went close again moments later when Manchester United loanee Nick Powell pulled the ball back for McCann to stab in a shot that clipped George Friend and flew wide.

Boro came into it 10 minutes before the break. Emmanuel Ledesma's corner was flicked on by Daniel Ayala for Mustapha Carayol to try a diving header that was deflected wide off defender James Perch.

The home side should have scored after the break, but Main inexplicably lifted his effort over the bar from Ledesma's cut-back.

With 14 minutes remaining, goalkeeper Given, on loan from Aston Villa, made an outstanding stop to prevent Crainey from giving the visitors the lead.

Wigan pressed once more, but this time midfielder Powell headed over from Jean Beausejour's cross.

"The game was not a good one for us. It was difficult as Wigan are a good team.

"We did not play with personality and we did not do enough to win the game. But when you can not win a game it is important that you do not lose it."

"Before the game I would have taken a point. We started slowly and did not play well in the first half.

"But in the second half we played much better. I was disappointed because we had the better of the game and had the chances to win.

"In the end we are disappointed to only take one point."