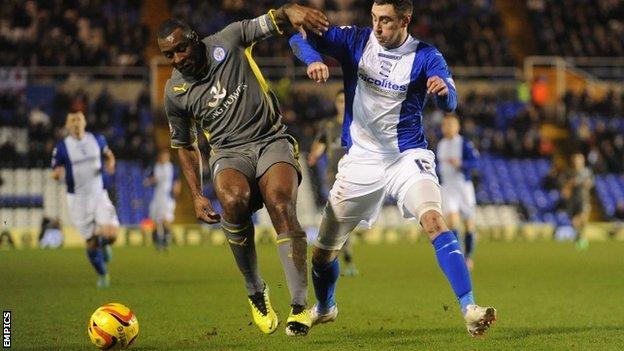 Championship leaders Leicester made it a club record eighth league win in a row as they beat Birmingham City.

The Foxes led midway through the first half when David Nugent played in Lloyd Dyer, who smashed the ball into the roof of the net.

Peter Lovenkrands headed in a last-minute goal for Birmingham but it was too late to spark a comeback.

Leicester broke a club record with their eight consecutive league win. Their previous best run of seven was back in 1993

The win for Leicester keeps them eight points clear of second-placed QPR, and more importantly, extended their advantage to 11 points over third-placed Burnley, who could only draw.

Birmingham have failed to win any of their last nine home games, a run stretching back to 1 October, and they are now only five points above the relegation zone.

The Foxes dominated the early stages, with Vardy going close and Danny Drinkwater forcing a save from Darren Randolph.

They deservedly led when Nugent played in a low angled ball from the right to the unmarked Dyer, who was able to take a touch before firing high into the goal.

Leicester could have doubled the lead when Dyer set up Anthony Knockaert but Randolph saved his effort from close range with his legs.

Blues improved after the break but Vardy finished the game as a contest when he received a Riyad Mahrez pass and dribbled down the right before firing an effort into the far corner.

"We were aware about the record but the players never discussed it. It was an added plus that we were able to achieve this record. To win eight games on the trot is very difficult in any league, particularly the Championship.

"The players have to take a great deal of credit with their ability to win different types of games. In this league you have to scrap and be resilient. I think against Birmingham we showed that we are capable of playing some really good football.

"The players are very focussed on the goals we have set and that is to win promotion. The chemistry within the squad is good and we are better equipped to deal with disappointment."

"The scoreline doesn't tell the whole story. In every aspect of the game Leicester's confidence was sky high.

"We were happy at the end of the first half that it was only 1-0. We had a go in the second half but they were always the dominant side.

"The league table doesn't lie. Eight wins on the bounce at any level is a fantastic achievement. They have quality all over their team and Nigel Pearson has assembled a very good team. I hope that they go on and get promoted."