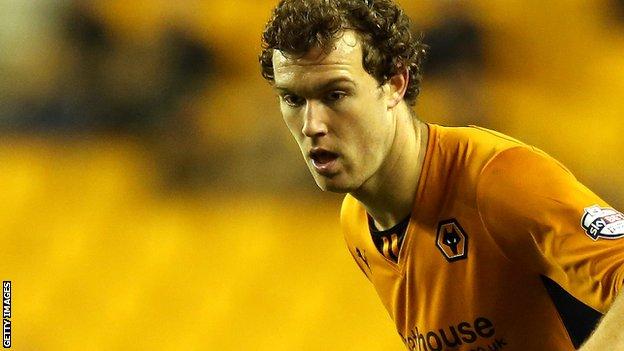 Kevin McDonald scored for the first time since 31 August as Wolves beat Oldham to keep pace with the automatic promotion places in League One.

The midfielder rounded off a counter attack early in the second half, firing in from outside the penalty area.

Wolves completed a league double over Oldham, having won 2-0 at Molineux in October.

But the Latics were victorious in the first round of the FA Cup, winning a replay 2-1 at Molineux after the initial tie at Boundary Park ended 1-1.

Oldham, meanwhile, are still four points above the relegation zone after falling to defeat in the fourth meeting between the two teams this season.

The final scoreline was harsh on the hosts, who had long spells of second-half pressure with the score at 1-0.

A first period littered with chances ended scoreless, Wolves striker Nouha Dicko coming closest to a goal when his turn and shot hit the crossbar, while Oldham goalkeeper Mark Oxley and opposite number Aaron McCarey were both forced into several saves.

James Dayton and Jonson Clarke-Harris were among those to squander opportunities for the home side, while Oxley denied visiting winger Bakary Sako on a number of occasions.

Oldham had come from 3-0 and 4-2 down to but could not stage a similar fightback, as centre-back James Tarkowski and Clarke-Harris failed to hit the target.

"I thought we were well in the game until the second goal.

"We huffed and puffed but it was difficult because they're a strong side and they don't concede too many.

"We just needed to be a bit more clinical in front of goal, calm down a bit in the box and pick someone out. But it's expensive, that sort of quality."

"We needed some spirit coming here to Boundary Park and it was a good, gutsy win.

"It was an old-fashioned slug-out, with the ball in the box at both ends for most of the game.

"Sometimes it's tough to defend that, but we defended our box fantastically."