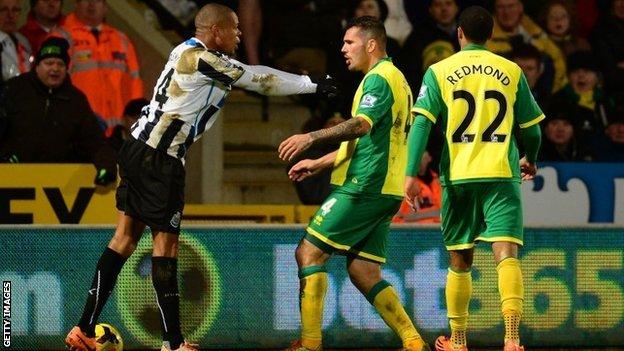 Newcastle were left frustrated by poor finishing and the woodwork at Norwich in a match that both teams finished with 10 men.

The Magpies, playing without soon-to-depart midfielder Yohan Cabaye, dominated in the first half but were unable to make the breakthrough.

Loic Remy hit the post and bar with two efforts, before the ball struck the post as Bradley Johnson tried to clear.

Both Remy and Johnson were later dismissed for an off-the-ball scuffle.

That incident only slightly marred an entertaining duel that somehow finished scoreless despite 31 efforts on goal.

Norwich finished stronger and could have snatched victory late on, with Tim Krul pulling off a brilliant save to deny Robert Snodgrass while Gary Hooper's sharp volley rattled the crossbar.

Defeat would have been unfair on the visitors, who were splendid only a day after it emerged the influential Cabaye, who has scored seven goals this season,

They embarrassed Norwich at times and should have sewn up their seventh away league win of the season in the first half.

First, the ball hit the post after keeper John Ruddy's clearance bounced off Johnson, then Remy struck the other upright with a delightful curling effort from 20 yards.

Fortune continued to favour Chris Hughton's men when Hatem Ben Arfa's drive was punched away by Ruddy before the Frenchman inexplicably scooped over from 12 yards.

Remy again went close to adding to his 11 goals this season when his 25-yard free-kick thundered off the bar as Newcastle pressed again in the second half.

Norwich, with Hughton's future as manager still in doubt, were impotent as a threat in the first half but improved after the break.

They came agonisingly close to only their seventh win of the season when Snodgrass stooped low at the far post only to see his header kept out by Krul. And then Hooper, whose season has been affected by injury, produced a lightning turn before flashing his volley against the bar.

The match had been played in a good spirit until the 82nd minute, when both Johnson and Remy were shown red cards by referee Chris Foy after a bout of pushing.

The draw leaves Newcastle eighth in the table with Norwich 12th, six points above the relegation zone.

"I presumed something else had happened apart from what I did see, which was him push Remy in the chest - over aggressively? Not really.

"Bradley has not gone down on the floor. All he has done is pull his head away.

"Regards the amount of contact, I don't know, but certainly Bradley Johnson is not the type of player who would look to get someone sent off.

"My gut feeling is we will appeal, but you always have to look at it again and make the right decisions."

"There is a bit of pushing and shoving, the players have come together, there is probably just enough for the referee to send them off.

"But Johnson's reaction, that he got a headbutt when he did not, was the catalyst for them both to get sent off.

"He made such a drama out of it, he should be ashamed of himself really."