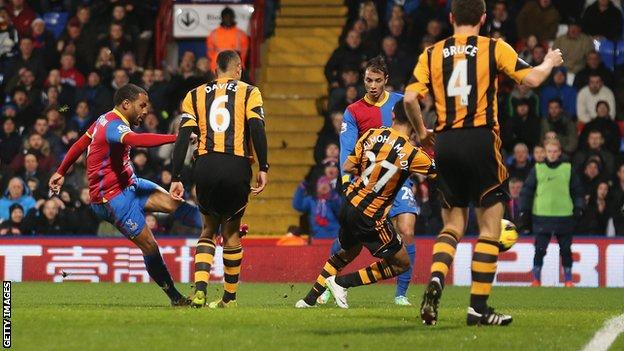 The midfielder rifled home from Yannick Bolasie's cross after his initial shot had been blocked.

But they could not find a goal before keeper Allan McGregor was sent off late on for kicking out at Stuart O'Keefe.

It capped a disappointing evening for Hull, who have now lost their previous four games in the league and are slipping closer to the relegation places. Steve Bruce's side are 13th, five points above 18th-place West Ham.

In contrast, Crystal Palace's revival since the arrival of Tony Pulis has been impressive.

When he replaced Ian Holloway on 23 November, they were joint bottom of the standings and three points adrift of safety, but they went into this game knowing a win would draw them level on points with the Tigers, who started the day in 11th.

Key to Palace's upturn in form has been a tightened defence which has kept six clean sheets in the 12 games previous Hull's visit.

That statistic was hardly welcome news for Bruce's side, who had not scored in their previous three games, but they did have their new £14m strike partnership of Jelavic and Shane Long together for the first time at Selhurst Park.

The pair were both heavily involved in the opening stages as Jelavic just failed to get on the end of an inviting David Meyler ball, before Long had a strong call for a penalty waved away when he was caught up in the legs of Danny Gabbidon.

But that was as much as was seen from the pair for the remainder of the half as they struggled to combine effectively.

Instead it was the hosts who took the lead with their first shot on target.

Bolasie's pace and persistence saw him get away down the right before crossing for Puncheon, who reacted quickly after his initial header bounced back off team-mate Marouane Chamakh. Puncheon then drove in from the middle of the box for his third goal in his last four Premier League games.

Hull finished the half well, testing Palace keeper Julian Speroni for the first time with the Argentine pushing away Tom Huddlestone's swirling free-kick.

And the visitors improved further after the break with Jelavic making better use of his physicality, smartly chesting down a high ball into the path of Livermore only for the midfielder to snatch at the shot and send it harmlessly wide.

Livermore and Ahmed Elmohamady combined effectively down the right and the introduction of George Boyd for Meyler added further creativity to Hull's attack. Liam Rosenior then stabbed wide from Livermore's ball before Jelavic shot across goal.

But any hopes of snatching an equaliser were ended in stoppage time when McGregor rushed to clear a loose ball but was clattered by an onrushing O'Keefe and the Hull keeper's angry reaction saw him dismissed by referee Roger East.

"We are pleased. The resilience the players showed was absolutely first class. We were together and showed a lot of spirit.

"We have seen again today that we have played a team with a lot of quality. We have 23 points, we need another 17 and it is going to be difficult, we know that.

"Since the penalty miss against Tottenham, Jason Puncheon has picked himself up and the two games since he has been wonderful."

"We are totally disappointed we have not taken anything from the game because we did not deserve that. Our night was summed up by the decisions we did not get.

"The chances for Liam Rosenior and Jake Livermore, they are great chances we should be taking. We came here and was absolutely dominating but we come away with nothing.

"You have to be careful because I have just been fined but I'll let everyone else have a look at it, not just the penalty decisions but also to send my goalkeeper off."