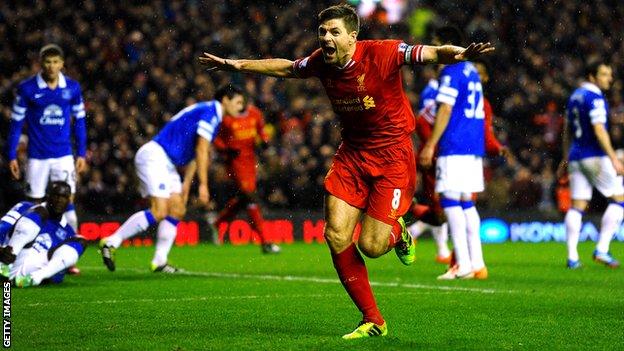 Liverpool maintained their pursuit of a top-four place in magnificent style as Everton were thrashed in the Merseyside derby at Anfield.

Billed as the most crucial league meeting between the sides in 30 years, the contest was all over inside 35 minutes as Liverpool raced into a three-goal lead courtesy of Steven Gerrard's header and two goals in three minutes from striker Daniel Sturridge.

Everton's agony was increased as Romelu Lukaku was taken off on a stretcher with ankle ligament damage after Gareth Barry slipped and slid into the striker as he attempted to block Gerrard's opening goal.

Luis Suarez added a fourth for the hosts when he cashed in on Phil Jagielka's mistake and Sturridge wasted the opportunity to secure a derby hat-trick when he blazed a penalty over the top after Raheem Sterling was fouled by keeper Tim Howard.

This emphatic victory, Liverpool's biggest derby triumph since November 1982, allowed them to open up a four-point gap over their neighbours - but the biggest worry for visiting manager Roberto Martinez may be the psychological damage inflicted, as well as the worry over the stricken Lukaku.

It left the Toffees still searching for their first win at Anfield since September 1999 - and there was never any serious hope they might alter that miserable record on a night of Reds dominance.

For Liverpool manager Brendan Rodgers, this win will be further evidence that his side can seal a top-four place and maybe achieve even greater things with Arsenal, Chelsea and Manchester City still to come to Anfield this season.

Martinez produced something of a surprise when he recalled Ross Barkley after a broken toe, while captain Jagielka recovered from a hamstring problem picked up in the FA Cup win at Stevenage.

And Barkley almost made the perfect comeback in the opening minute with an ambitious rising drive from 25 yards that was inches over with Reds keeper Simon Mignolet stretching.

Liverpool are now unbeaten in the last 14 Premier League Merseyside derbies at Anfield, with Everton's last away win coming courtesy of a Kevin Campbell goal in 1999

After this moment of optimism it was all downhill for Everton, however, not only in the manner in which they were dismantled by Liverpool's attacks but with the crucial loss of Lukaku.

Howard had already saved from Jordan Henderson, Suarez and Sterling before Liverpool went ahead after 21 minutes in an incident that had short- and long-term consequences for Everton and Martinez.

Barry slipped as he tried to track Gerrard at Suarez's corner, allowing the Anfield captain to head in powerfully but also taking out Lukaku, who was carried off on a stretcher with ankle damage after lengthy treatment.

Everton were at last sparked into action as Jagielka's shot was saved by Mignolet and Kevin Mirallas was just off target - but the home side were a constant threat and swiftly added a second.

Youngster John Stones lost Sturridge and the England forward raced on to Philippe Coutinho's pass to loft a cool finish over Howard, a chance the in-form striker never looked like missing.

Martinez sent on Leon Osman for Pienaar at half-time and the veteran had a shot well saved by Mignolet before normal service was resumed.

The normally reliably Jagielka was having an unhappy evening and he was the culprit as Everton fell further behind five minutes after the break, conceding possession to Suarez and never having the pace required to catch the striker as he raced half the length of the field to beat Howard.

Liverpool should have inflicted further punishment on Everton when referee Martin Atkinson awarded a penalty after Howard pulled down Sterling. Sturridge took over penalty duties from Gerrard, presumably in search of his hat-trick, but lashed an awful effort high into the Kop.

Everton were left with no hope other than restricting the damage. They achieved this minor objective - how they recover from the way they were taken apart by a rampant Liverpool remains to be seen.