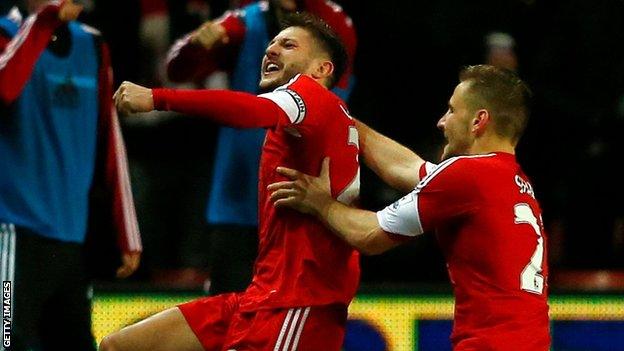 Premier League leaders Arsenal dropped points in the title race as they were held by Southampton in an enthralling contest at St Mary's.

Jose Fonte headed in Luke Shaw's cross to give the Saints a deserved lead.

But Arsenal turned things round with two quick goals after half-time, from Olivier Giroud and Santi Cazorla.

Adam Lallana brought Southampton level when he turned in a Jay Rodriguez pass before Arsenal's Mathieu Flamini was sent off for a rash challenge.

Gunners goalkeeper Wojciech Szczesny then pulled off a fine double save in the closing stages to keep out efforts from Shaw and Fonte and deny the home side all three points.

Southampton would have been good value for the victory as they outplayed their visitors for large portions of the match.

Arsene Wenger's men looked a pale imitation of their usual selves as they opened the door to title rivals Manchester City and Chelsea.

Both could overtake Arsenal with victories on Wednesday, when City visit Tottenham and Chelsea host West Ham.

Southampton made a confident start, dominating possession and creating openings.

Sam Gallagher, an 18-year-old striker making his first start, drew a sharp save from Szczesny before Morgan Schneiderlin dragged wide from the edge of the box.

Arsenal were struggling in midfield in the absence of the injured Aaron Ramsey and Jack Wilshere, with Mikel Arteta and Flamini finding themselves overrun.

And the Saints gained their reward on 20 minutes when Shaw curled in a cross from the left and Fonte rose highest at the far post to head past a static Szczesny.

The half continued in the same one-sided vein, and Southampton should have gone further in front when Gallagher was gifted a chance six yards out but the ball flew wide off his shin.

Laurent Koscielny missed Arsenal's first real opportunity on the stroke of half-time when his low shot from Mesut Ozil's corner was well saved by Artur Boruc.

The Gunners emerged a different team after the break, and within seven minutes of the restart they were in front.

First Bacary Sagna's low cross was directed behind Giroud, but the France striker adjusted his body and back-heeled past Boruc.

Then Ozil squared the ball to Cazorla, whose low shot with the outside of his left foot found the corner.

But Southampton were soon back level as Lallana timed his run to perfection to meet Rodriguez's cut-back and steer home.

It was a wonderful spectacle, with play flowing from end to end and chances for both sides.

Ozil hit the bar for Arsenal following a surging run from inside his own half, before Nacho Monreal sliced wastefully wide.

At the other end, a long ball put Rodriguez clean through, but Szczesny raced off his line to snatch the ball from the England striker.

With 10 minutes left Arsenal were reduced to 10 men when Flamini was shown a straight red card for a two-footed challenge on Schneiderlin.

From then on, it was an onslaught from Southampton, with Szczesny having to be at his sharpest to ensure his team clung on to the draw.

"We played in second gear and Southampton in fourth. They played at a higher pace than us, decided to stop us from playing and did it very well.

"You want the three points in every game but it is a difficult place Southampton. When you look at the overall record it can happen sometimes away from home you take only one point.

"If you say that every time a guy makes the two-footed tackle it is a red card he deserved a red card. If you say was it a violent tackle I would say no as he played the ball. I don't know, the referee made the decision, we have to cope with it."

"I thought the team was outstanding. We were sensational in the first half and did really well.

"It was total football. In the second half we didn't start so well and conceded two quick goals.

"I would highlight fact we were able to get back into it - we showed amazing character and we deserved to win in the end."