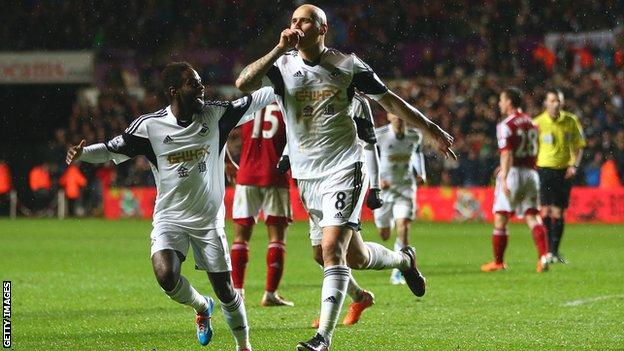 Swansea ended a run of eight Premier League games without a win to climb clear of the relegation struggle and leave Fulham deep in trouble.

Jonjo Shelvey and Chico Flores scored the goals, both aided by wicked deflections past Maarten Stekelenburg.

Shelvey had already hit the bar before his shot struck two defenders en route to the net, while Flores's flicked header went in off Dimitar Berbatov.

Swansea jump to 10th while Fulham languish a point above the drop zone.

Although the two goals conceded could be considered unfortunate, the Cottagers have now let in 50 - comfortably the worst defensive record in the division.

An approach for Leicester defender Liam Moore has been rebuffed in a quiet transfer window for the Londoners, whose only addition of note is the arrival of former player Clint Dempsey on a two-month loan from Seattle Sounders.

Swansea have been equally restrained, adding David Ngog from Bolton although there was no place for the former Liverpool forward against Fulham.

Instead, Michael Laudrup's ranks were swelled by the return from injury of midfielders Jonathan de Guzman and Shelvey - who scored the winner the last time these two sides met - and Nathan Dyer, who was named on the bench.

Given both teams' recent inability to keep a clean sheet, it was something of a surprise that there were no goals in the first period to entertain a full house at the Liberty Stadium.

Wilfried Bony looped a header over, before Shelvey crashed a shot off the Fulham crossbar after being picked out by Pablo Hernandez.

Stekelenburg in the Fulham goal was called into serious action for the first time soon after the restart, clawing away Flores' header before diving left to field De Guzman's shot.

That persuaded Laudrup to turn the screw, sending on Dyer in place of Hernandez for his first action since being injured on 15 December.

The winger had an immediate impact by teeing up Shelvey for the opening goal, although the ball took a double deflection off Steve Sidwell and Hangeland.

It took a flying stop by Stekelenburg to prevent De Guzman doubling Swansea's lead as the home side continued to dominate.

But with 15 minutes remaining the Fulham keeper was fooled again as Berbatov got the final touch after Flores flicked on De Guzman's free-kick.

Rene Meulensteen sent on Marcus Bent for Dejagah in an effort to rescue something for Fulham and the striker did bring a good low save out of Tremmel.

But it was a rare moment of concern for Swansea who are now looking relatively comfortable in mid-table, while the gloom continues to gather around Fulham.