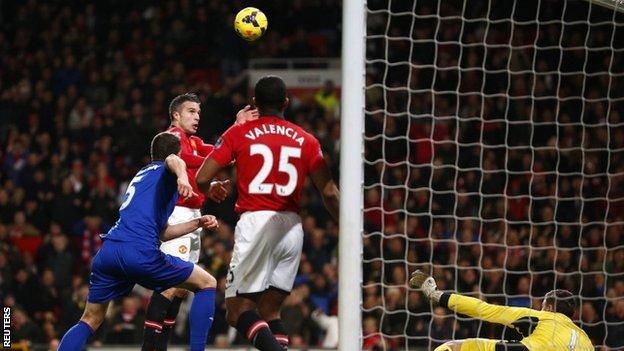 Record signing Juan Mata made a confident start to his Manchester United career by playing his part in a morale-boosting win over Cardiff, as Robin van Persie scored on his return after 11 games out.

Six days after United's calamitous Capital One Cup semi-final defeat by Sunderland, Mata improved the mood around Old Trafford by helping to create Van Persie's opener as United kept in touch with the race for next season's Champions League.

Ashley Young cracked in a superb 25-yard shot after the break to make the game more comfortable against a quicksilver Cardiff side.

And although Mata missed two decent chances to crown his debut with a goal, it was an evening of several positives for manager David Moyes as his new £37.1m acquisition departed late on to a standing ovation.

One was the way the 25-year-old Spaniard quickly linked well with his new team-mates following his arrival from Chelsea, while United were also boosted by the return from injury of strikers Van Persie and Wayne Rooney, the latter starting on the bench.

It was not a totally fluent performance, but it brought three points that moved United within two of sixth-placed Everton and made them the first team to win 1,000 points at home in the Premier League.

After losing four of their past six games, the win and the return of key personnel will give United a chance to build momentum before they face Premier League leaders Arsenal on 12 February.

It was a less happy evening for Cardiff boss Ole Gunnar Solskjaer, who was denied a winning return to the club where he was such a prolific striker. His side enjoyed good spells but could not find a cutting edge to go with their possession.

Despite two wins in the FA Cup, the 40-year-old Norwegian is still looking for his first league win as his side remain bottom of the table.

After a miserable month for Moyes's side, the atmosphere has been similarly gloomy at Old Trafford.

But following Mata's signing on Sunday and news of Van Persie and Rooney's return, there was a sense of optimism before kick-off.

Juan Mata made more passes [52] than any other Manchester United player on his debut, with a completion rate of 86.5%.

And it continued into the match as United took a sixth-minute lead, with Mata involved.

The attacking midfielder, who played behind striker Van Persie, raked the ball out to the left from a deep position and, after Antonio Valencia headed Young's cross onto the bar, the Dutchman scored from close range at the second attempt.

It was a dream start for United and it could have been even better before half-time.

Mata almost set up Young for a second United goal but the winger was inches from the Spaniard's deep cross before Van Persie pulled an effort wide from a narrow angle.

Although Cardiff had fewer chances before the break, they were dangerous on the counter-attack with Craig Noone lively and Mark Hudson drawing a stop from David De Gea following a corner.

There were further nervous moments for the hosts in the second half as Cardiff continued to break quickly.

But Young's strike out of the blue before the hour mark led to a more comfortable spell for Moyes's side.

Mata and Jonny Evans both had decent long-range efforts and, with the crowd urging United to attack, Rooney replaced Van Persie for his first action since 1 January following a groin injury.

His lob almost brought a third goal, as did a Valencia strike that Cardiff goalkeeper David Marshall turned onto the post.

For Moyes, though, this was an encouraging evening that suggested his January transfer dealings have already had a more positive impact than last summer's did.