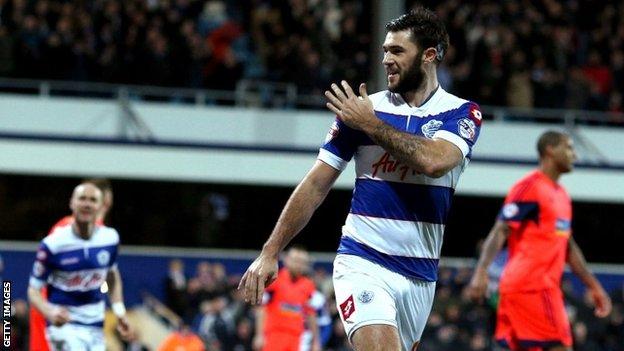 After dominating the first half, Bolton were undone when Austin headed home Matt Phillips' cross.

Henry doubled the lead five minutes after the break with a 20-yard shot into the bottom corner.

Jay Spearing scored a late consolation goal for Bolton, who have won only one of their last seven league matches.

Bolton, who are struggling at the other end of the table in 18th, went close through Darren Pratley, before Craig Davies hammered a 25-yard shot against the crossbar with Rob Green well beaten.

QPR made the most of their good fortune as Austin rounded off a fine move to score his 15th goal of the season.

Bolton suffered further punishment when Henry fired in his first goal for the club from long range, although Bolton remained a threat and Green had to produce two fine saves.

Shortly after the tipping over Lee Chung-yong's effort, the keeper dived to his right to push away Medo's powerful strike.

Rangers struggled to carve out clear-cut chances and had to endure an nervy finale finish after Spearing's 85th-minute shot from just outside the area flew past an unsighted Green.

"Charlie's got a problem with his shoulder and we don't yet know the extent of it.

"He had to come off after going on as long as he could. In the end it was too much for him and we'll have to assess it.

"He's as game as they come and got his goal from a great cross by Matt Phillips. We know we're reliant on Charlie and didn't need reminding."

"We've just got to keep going and things will change for us. I felt we were very unfortunate.

"The little things are just not going for us but the performance levels and the commitment are both there. We've got to make sure that we keep the standards high and on another day the shot that hit the bar goes in.

"I'm very proud of the lads' effort. We felt we were very unlucky not to take the lead on a few occasions and felt hard done by to be 1-0 down."