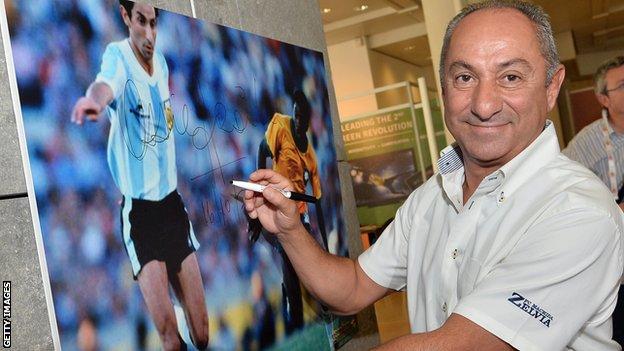 Ossie Ardiles says he is "fine and doing well" after a car crash left the ex-Tottenham midfielder needing more than 20 stitches in his head.

Ardiles, 61, was believed to have been driving on the Falkland Islands , with fellow ex-Argentina midfielder Ricky Villa a passenger.

"The attention and care we have received from the police, the RAF helicopter team, the doctors and nurses has been world class," said Ardiles.

"Thanks to everyone for your concern."

Ardiles is understood to have been hospitalised overnight after the accident.

I don't know the exact details, but I understand my dad was driving and that he lost control somehow

He and Villa are in the Falkland Islands to film a television documentary, which is being directed by Freddie Ardiles, the younger of the former footballer's two sons.

Four passengers have been released from hospital after treatment for minor injuries. Three others have been detained.

"Ricky Villa and my brother were out there but they are OK and are back in the hotel," said Ardiles' elder son, Pablo, speaking from his home in England.

"I don't know the exact details, but I understand my dad was driving and that he lost control somehow. I've heard reports he swerved to avoid a sheep but I can't confirm that.

"The main thing is he is fine, they are all OK."

Local emergency services and the British military attended the scene of the accident with those involved flown to King Edward Memorial hospital in Stanley.

"I can confirm that there was a road traffic accident involving seven passengers last night in the Islands," a spokesperson from the Falkland Islands Government said.

"Thankfully, due to the fast action of our rescue services and the British forces, they were successfully evacuated to hospital in Stanley, where their injuries were assessed.

"Three members of the party remained in hospital overnight for observations and further treatment, and the remaining four were released from hospital following treatment for minor injuries."

Ardiles moved to Tottenham in 1978 from Argentine club Huracan just a few months after winning the World Cup with his country.

He spent 10 years at White Hart Lane, apart from a brief spell on loan at Paris St-Germain, and won both the FA Cup and Uefa Cup during his time with the London club.

The diminutive midfielder went on to have spells with Blackburn, QPR and Swindon Town.

He took over as manager of the Robins in 1989 before periods in charge of Newcastle, West Brom and Spurs.