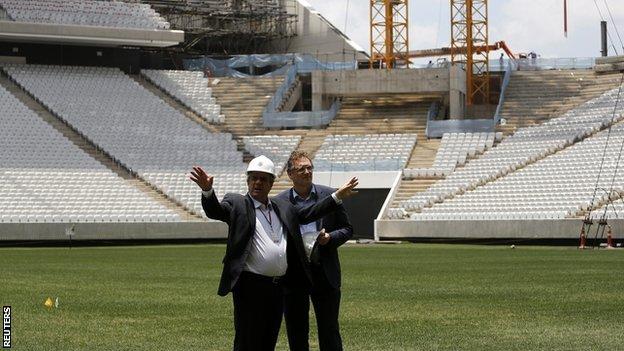 The pressure is on Brazil to be ready to host this summer's World Cup, says Fifa general secretary Jerome Valcke.

Valcke made the comments during an inspection tour of Brazil, where some of the 12 stadiums remain unfinished.

The Frenchman changed a planned visit to Manaus, where England will play their opening game against Italy, to go to the Curitiba venue which is heavily behind schedule.

"Brazil has no choice. Brazil has to be ready," said Valcke.

"In 2007 you [Brazil] asked the world to support you to organise the World Cup in 2014. You have to welcome 31 teams from around the world.

"Brazil has to welcome thousands of thousands of fans and 7,000 journalists coming from around the world. So, we have to work together."

The World Cup will start at Sao Paulo's Arena Corinthians stadium on 12 June with a match between Brazil and Croatia.

Two workmen were killed at the venue as a crane fell and destroyed parts of stadium last November.

The crane that collapsed was removed last week.

"In a way I would say the pressure is a little bit bigger here," said Valcke. "It's the first game. It has to be a success. The world will be watching.

"We will do all that we can to make sure this opening game is a success."