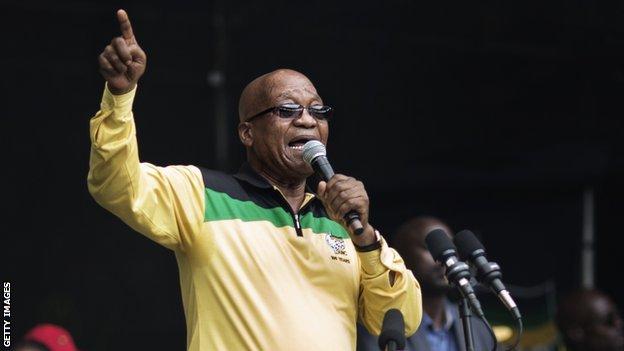 The side of locally based players was called "useless" and a "bunch of losers" by the country's sports minister Fikile Mbalula.

Zuma told a South African radio station: "The fact that the team lost, that doesn't mean anything as other teams lost as well.

"Some want the team disbanded. It has improved greatly and needs support."

Hosts South Africa were knocked out of the tournament after they lost 3-1 to Nigeria in Cape Town.

It led to a furious outburst from Mbalula, who called on the country to "forget this generation of players" and build a new team.

The early elimination puts pressure on coach Gordon Igesund, who has had a tough first year in charge of the national team.

He could only guide the hosts to the quarter-finals of the 2013 Africa Cup of Nations, missed out on qualifying for the 2014 World Cup, lost in the semi-finals of the regional Cosafa Cup and has now suffered a first-round exit in the CHAN competition.

But Zuma has given his backing to Igesund, saying: "We're well aware that some people are criticising the way the national team played against Nigeria. The current coach knows what he's doing. He's great at his job."

"I am fully aware that the national team needs urgent attention and we are dealing with the situation," Jordaan said.

"We have a meeting already scheduled in early February where the team name, technical staff and technical sponsorship will be addressed."