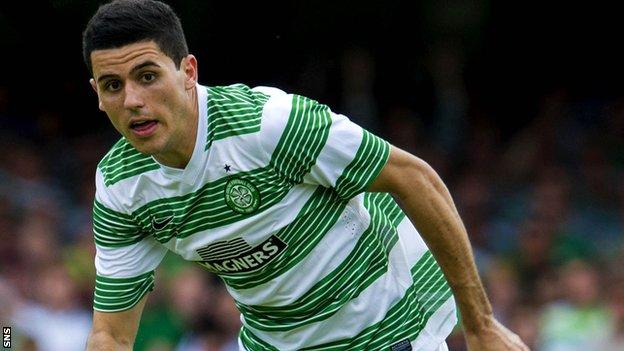 Celtic midfielder Tom Rogic has joined Melbourne Victory on loan until the end of this season.

The 21-year-old has struggled for first-team football since his £400,000 switch from Central Coast Mariners in January 2013.

Rogic has returned to his homeland until the summer and is aiming to feature in the World Cup finals.

"(Celtic's) a fantastic club but it's important for me at this stage in my career to be playing," he said.

Rogic has made five starts and nine substitute appearances for Celtic since his move to Glasgow.

"It's a fantastic squad there and it's very difficult to break into," he said. "There's a lot of great players.

"It's been a good learning experience. I feel I'm a much better player than I was 12 months ago so I look back on the past 12 months as a positive.

"It's great set-up with amazing fans and it's great to be a part of that. I enjoyed winning the double last year.

"It's a successful club, in the European Champions League, so I certainly don't have any regrets."

The midfielder, who has eight caps, is keen to cement his place in the national side ahead of the World Cup in Brazil.

"It's certainly a big factor," he said. "I don't think there's any Australian footballer right now that wouldn't want to be a part of that World Cup.

"At 21, the thought of possibly being at a World Cup in Brazil is pretty special.

"Obviously I want to do everything I can to be part of that."

Celtic wished Rogic "every success" during his loan spell.