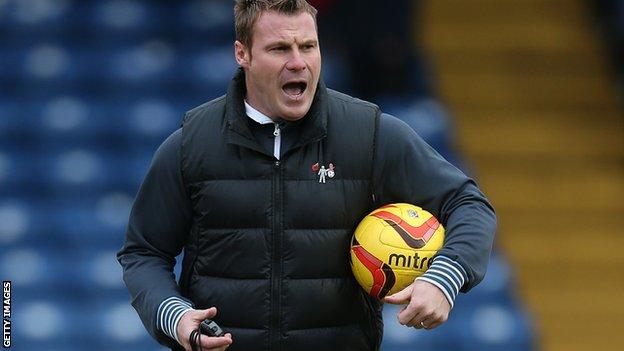 Bury manager David Flitcroft says he wants to add further players with "quality" to his squad in January.

The League Two team have signed five players in the transfer window and released five others.

"I have made my promise to the chairman and the board that I will attract as good a player as I can to Bury," Flitcroft told BBC Radio Manchester.

"We are getting a lot of things right but it has been a relentless four weeks of getting players out and in."

Defender Gareth Roberts, an experienced Football League player and who was named club captain by previous boss Kevin Blackwell, was part of the quintet to depart the DW Stadium.

But Flitcroft feels there is no room for sympathy in football.

"You don't get pleasure out of moving people on," said Flitcroft.

"They are great professionals and you have to say bye to them, but they have to move on with their football careers.

"We want to move forward here, I don't look into the past. I am looking to the future."

The side drew 0-0 against high-flying Burton Albion in the league on Saturday, leaving them 18th in the table.

Flitcroft is adamant the club are heading in the right direction, as they look to avoid relegation into the Conference Premier.

"You have to lay a foundation and at the moment we are laying down a footing," added Flitcroft.

"We are clearing away the earth to lay that first brick.

"It is important we do that because the foundations of the type of football we want to play is about the players, it is about the quality I can attract to the club.

"I want to see real fluid football. I have a massive job on."