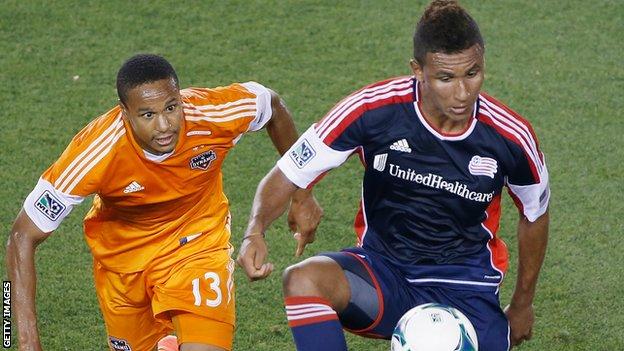 Stoke City have confirmed the signing of United States international Juan Agudelo but were forced to send him on loan to FC Utrecht after failing to obtain a work permit for the striker.

The striker, who has 17 caps, signed from Major League Soccer side New England Revolution on a free transfer.

But the Premier League club's November bid for a work permit was rejected, and they cannot reapply until March.

Who is Juan Agudelo?

They have sent Agudelo, 21, to the Dutch club until a second bid is made.

"We were surprised and bitterly disappointed when our application for a work permit was rejected by the appeals panel - as were many other people in the game," said chief executive Tony Scholes.

"It's still our view that Juan is a great talent and is a player that [manager] Mark Hughes would like to join our squad. We have therefore decided that we are going to reapply for a work permit at the earliest opportunity."

Stoke have already signed a striker in the January transfer window with the acquisition of John Guidetti, 21, on loan from Manchester City for the rest of the season.