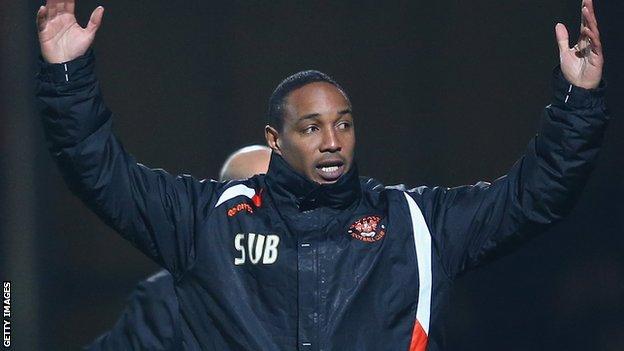 Blackpool have sacked manager Paul Ince after less than a year in charge.

The Seasiders were briefly top of the Championship this season after winning five of their opening six games, but have not won since 30 November.

Ince's departure was confirmed in a brief club statement that also said midfielder Barry Ferguson will take charge of training on Thursday.

In October, Ince was given a five-match stadium ban by the Football Association, and he won only 12 out of 42 games as boss.

His last match was a 2-0 defeat at bottom club Barnsley on Saturday and his assistants, Alex Rae and Steve Thompson, have also left the club.

Blackpool chairman Karl Oyston told the club website: "It was a really unpleasant thing to do, I've only ever sacked one manager before. We got off to a good start this season, the best in the club's history, so you have to weigh all those factors in, which made it a lot more difficult than the last time in my reign.

"We do owe a great debt of gratitude to Paul and Alex for picking us up in disarray last season and securing our Championship status."

The Blackpool Supporters Association had taken a unanimous vote of no confidence in Ince on Monday evening.

And the BSA also produced a six-point letter to Oyston, giving their view that Ince's position was "untenable" and that his "tactics, attitude and results has destroyed the morale of Blackpool fans".

"It got to the stage where we had to react and do something, particularly after I'd sat down for a good few hours on Sunday night with Paul, Alex and Steve," Oyston added.

"We tried to go through what was wrong and how we could get out of it. The clock was ticking and I felt we needed some fresh ideas, because we'd run out of ideas.

"The fact we're absolutely floundering with ideas of recruitment - because ideas can't come from me and Matt [Williams, club secretary] - we need players in and there is no sign of that on the horizon, that is one of our biggest problems, so that weighed heavily."

"Staying in the Championship is now the priority, it is very easy to drop out. The main thing is to tighten the ship and secure their position in the league.

"No matter what division you are in, football managers these days are in a results business. The last series of results have not been good and you cannot go on like that.

"It is always sad when the manager goes, and the chairman has never been keen on sacking people, he has always tried to support them but that is the nature of the job."

At Stadium MK he won the League Two title and Football League Trophy before being given a chance in the Premier League by Blackburn.

But Ince was sacked by the Ewood Park club after less than six months, having won only six out of 21 games in all competitions - and after leaving Notts County in April 2011, he was out of work for almost two years before joining Blackpool on a one-year rolling contract.

He was given the task of keeping the club in the Championship and met that target as they finished last season in 15th place, five points above the relegation zone.

But a poor run of recent form, which brought just two points from their last 12 games and an FA Cup third-round defeat at Bolton, prompted Oyston to relieve Ince of his post.

Ince's son Tom remains a Blackpool player despite being repeatedly linked with moves to other clubs, most recently Monaco.