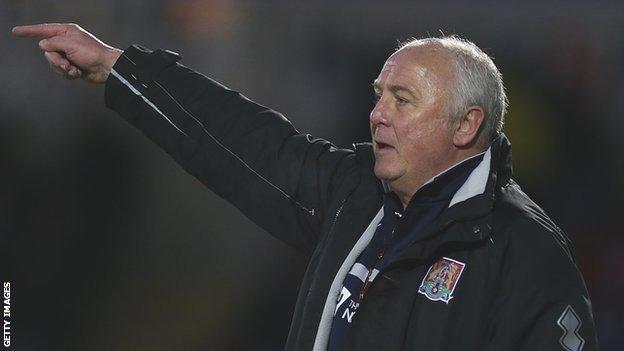 Northampton Town caretaker boss Andy King has said it is not ideal the club has been without a manager for a month.

but League Two's bottom club are yet to name a permanent successor.

"I'm just going week to week. It's not perfect but that's the situation we've got," King told BBC Radio Northampton.

"Other people have faced this situation in football. I'm happy to be in charge and while I am, all I can do is win football matches."

Cobblers chairman David Cardoza said on Monday that he was "talking to one or two people" and "waiting for situations to unfold".

He added that the new manager, when appointed, will be given "significant money" to strengthen the squad.

Until then, former Swindon boss King, who was Boothroyd's assistant, will prepare the side for Saturday's visit of Chesterfield, before games against Rochdale and Cheltenham.

King has won one of his four games in caretaker charge.

"I think there's a little twist of saying if we can win our next two home games - I know it's a big if - it could build what I'm looking for for the run to get us out of the situation."