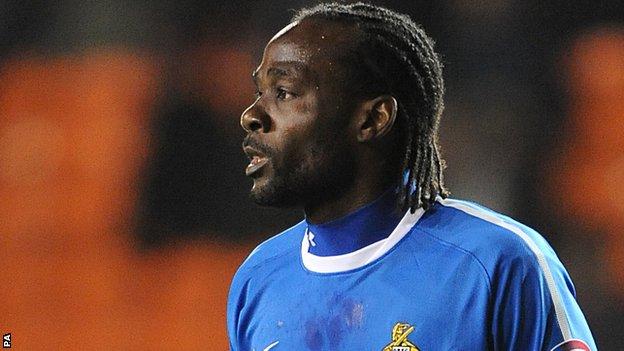 The 34-year-old spent 15 months without a club after leaving Doncaster Rovers before in October.

His deal at Brunton Park expired last weekend but he quickly until the end of this season.

"Kav gave me a chance back in football after so much time away so it was only right to stay for the whole season at the least," he told BBC Radio Cumbria.

The former France full-back has played in the Premier League for Wigan Athletic, Tottenham Hotspur, Sunderland and Blackburn Rovers, and was included in his country's 2006 World Cup squad.

But when he was released by Doncaster following their relegation from the Championship in 2012, he suffered from persistent injury problems as he sought a new employer.

A year later, he for Northern League side Market Drayton Town and was by Conference South club Colwyn Bay.

"I'm enjoying things at Carlisle and I really wanted to show the manager my loyalty," said Chimbonda.

"I think he's happy with the commitment I've shown. There was interest from elsewhere but it really was not a hard decision to stay."