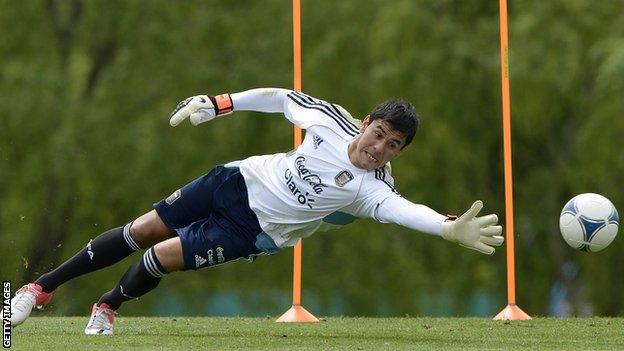 Sunderland have signed Argentine goalkeeper Oscar Ustari until the end of the season.

The 27-year-old, who ended his contract with Spanish club Almeria on Tuesday, has played twice for Argentina.

He becomes Sunderland's third January signing after the acquisitions of Marcos Alonso and Santiago Vergini.

The Black Cats face Manchester United in the second leg of the League Cup semi-final on Wednesday and Ustari is expected to be named on the bench.

Ustari played under Swansea coach Michael Laudrup during his spell as manager of Getafe, but moved to Boca Juniors in 2012.

After joining Almeria at the start of the 2013-14 season, Ustari failed to make an appearance, prompting his request for the club to end his contract as he hopes regular football will aid his chances of making Argentina's World Cup 2014 squad.

Vito Mannone has played in goal for Sunderland in their last 13 Premier League matches, with Kieran Westwood, who started the season as the club's first choice goalkeeper, still sidelined with a shoulder injury.