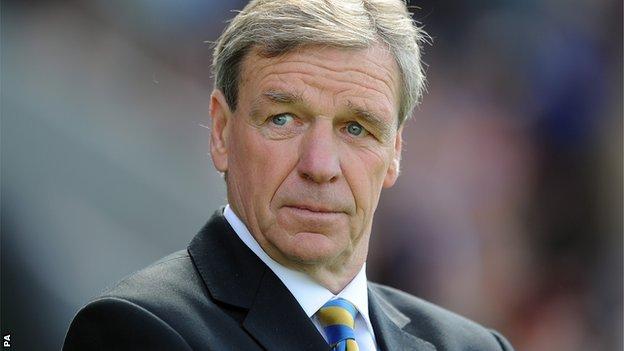 Graham Turner has stepped down as boss of League One side Shrewsbury Town, ending his 35-year managerial career.

The 66-year-old was the longest-standing manager in English football.

Turner took his first managerial post at Shrewsbury in 1978 and moved on to Aston Villa, Wolves and Hereford before returning to Shropshire in 2010 for a second spell in charge.

But having led Town back to the third tier in 2012 and kept them up last term, they are now 20th in League One.

"I've got to be honest, you sit and contemplate the future, and I would think it would be fair to say that my managerial days are over," he said.

"There might be something I can contribute somewhere. There may be a door open to come back at sometime in the long-term future here.

"But I go away purely with the view that my time is up here. It's the right time to do it.

"It's a very sad decision. It's a club that I've really enjoyed working at, it's a club that gave me my first opportunity in management so I'll always appreciate that and will always be close to the club."

Saturday's 3-0 home defeat by Rotherham United was Town's sixth successive reverse in front of their own fans, a performance which had them booing their displeasure and further registering frustration on social media sites.

"It wasn't necessarily just Saturday," said Turner. "There's been a sequence of results where for several weeks now I thought I could improve things. It hasn't materialised so I felt that there was a need for a decision to be made.

"I don't think we could just carry on in the same vein and the decision I reached was that I would step down as team manager of Shrewsbury Town."

"I just feel that sometimes there's a fresh voice needed in the dressing room, and I think the time is right to do that at this club."

Turner stressed that he had received total support from Town chairman Roland Wycherley.

"It's a sad end for a man with such standing not only at Shrewsbury Town, but in English football.

"Graham Turner was the longest-standing current club manager in the country - having started over 35 years ago in his first stint at Shrewsbury.

"In his first season, he led an unfashionable club to the dizzy heights of what is now the Championship.

"Aston Villa and Wolves recognised his talents, and he later managed Hereford too before returning to Shrewsbury in 2010, taking them up to League One in 2012 - his sixth promotion.

"Last season Shrewsbury stayed up. But, with safety in doubt this time round after a bad run of results, the pressure was on - as Turner himself admitted - and The Legend has gone."

"I don't think there was any thoughts of him asking me to resign or anything like that. In fact, he's done nothing but back me all the way," he said.

"Anything I've wanted within reason he's provided me with and, if the right players had been available, there would have been funds available, I've no doubt about that.

"The fact that we haven't been able to sign players over the last month or so when they were badly needed, I don't think in any way shape or form it was down to any reticent attitude from the chairman to provide the finance. He has backed me 100 per cent."

Wycherley said he was "very sad" to lose Turner and that the board had tried to persuade him to reconsider.

"I wish to go on record in thanking Graham for his exemplary service towards our club both in recent seasons, when he returned to guide us successfully to promotion to League One and our highest league position in over 18 years, and for his efforts as a player and manager in the 1970s and early 1980s," he said.

"Graham has rightly achieved 'legend' status at our club and I trust that history will treat him with the respect that his endeavours for this club deserve."

Among the early frontrunners with the bookmakers to succeed Turner is Gary Megson, who ended his playing career with Shrewsbury in 1995. Former Liverpool and England striker Robbie Fowler is also set to apply for the vacancy.