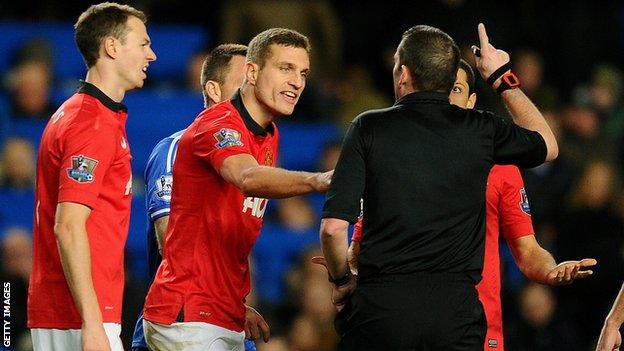 Manchester United captain Nemanja Vidic has had an appeal against his sending-off at Chelsea rejected.

Vidic, 32, received a straight red card for serious foul play for a tackle on Eden Hazard late in United's 3-1 defeat at Stamford Bridge on Sunday.

He will miss Premier League matches at home to Cardiff and at Stoke.

Nemanja Vidic has been sent off six times for Manchester United since moving to Old Trafford in 2006, three times against Liverpool, twice against Chelsea, and once in the Champions League against Otelul Galati

His claim for wrongful dismissal was rejected by an independent regulatory commission on Tuesday.

Manchester United are trailing Sunderland 2-1 after the League Cup first-leg tie as they look to secure their place at Wembley, with the winners likely to face the Old Trafford side's local rivals Manchester City in the final.

But they will have to do it without Serbia defender Vidic, who received his first red card of the season when he needlessly lunged at Hazard on Sunday.

He could have been joined on the sidelines by right-back Rafael, who was only booked for a two-footed lunge on Gary Cahill.

United manager David Moyes said after the match: "I thought Nemanja's was a yellow card but I thought, on another day, the one afterwards when Rafael got a yellow card could have been a red card."