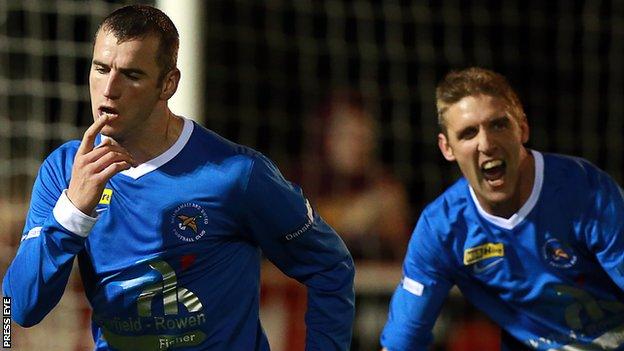 Ballinamallard United are through to meet Glenavon in the last 16 of the Irish Cup after seeing off Strabane Athletic in the fifth round replay.

The Premiership side got the only goal of the game through a Ryan Campbell header in the 20th minute.

David Kee's cross was nodded back by Mark Stafford and Campbell pounced for the match-winning score.

Intermediate League side Strabane, who got a 0-0 draw at Ferney Park in the first game, worked hard for a leveller.

But it was Whitey Anderson's Mallards who almost made it 2-0 near the end when Kee struck the crossbar with a free-kick.

Ballinamallard host Glenavon in the sixth round on Saturday, 8 February.

"It was very tough but I felt we should have had it wrapped up at half-time," said Ballinamallard manager Whitey Anderson.

"But, once again, we did not have our shooting boots on.

"Strabane are a very well organised side - they deserved to take this tie to a replay and they like to get the ball down and play football.

"I am just delighted for our players because they have been through a rough patch recently.

"Hopefully this will give them a wee spur before we go to Coleraine on Friday night."