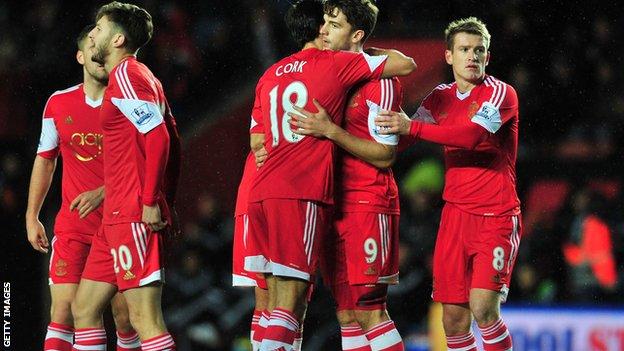 In an open letter to supporters, Liebherr reiterated her support for manager Mauricio Pochettino and that the clubs players are not for sale.

"Off the pitch, my priority is to establish the proper running of the club at the top," said Liebherr, 45.

2013 - On the same day, Cortese files to resign from his position as chairman.

The resignation of Cortese, who bought the club on behalf of Liebherr's late father in 2009, sparked fears over the future of Pochettino.

The Argentinian had previously said he would leave the club if his former-chairman did, but vowed to reconsider his future at St Mary's at the end of the season after a meeting with Liebherr.

"I have met our manager Mauricio Pochettino and have given him my complete support to build on the good work that has already been achieved," added Liebherr, who inherited the club in 2010.

"We have also said that we have no plans to sell any of the squad during the January transfer window. Yesterday I met the rest of the staff and gave them the same message of support."

Cortese's disapproval of Liebherr's desire to sell the Premier League club prompted the former banker to offer his resignation in October 2013.

Liebherr, now non-executive chairman, is searching for his replacement.

She added: "I will ensure that all decisions made about the future of the club will be in the best interests of its staff, players, management and fans.

"The decisions will be taken with the prime objective of honouring and maintaining the club's heritage and tradition in the Southampton way."