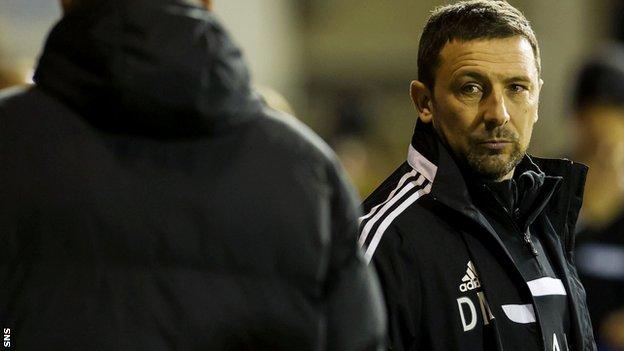 Derek McInnes feels Aberdeen are "well equipped" for the rest of the season but has not ruled out further signings.

"We have let some which has released some funds," said manager McInnes.

"If we thought there was somebody there that could help us then we would look to get that deal done but it has to be within the parameters."

has been linked with a loan move to Pittodrie, having spent the .

And, when asked again about the player on BBC Radio Scotland's Sportsound, the Dons manager commented: "Blackburn have a decision to make.

"If they phoned me and said there was a chance he could come to Scotland then we would be interested in that but there is nothing imminent."

Second-place Aberdeen visit third-place Motherwell in the Scottish Premiership on Saturday before the Dons take on St Johnstone in the League Cup semi-finals the following weekend.

"We want to go into the semi-final with a positive frame of mind," added McInnes.

"There's been a lot of talk around the game. We've been pretty consistent this season, we've got ourselves in a good position in the league and we're still in both cups but we've still got it all to do.

"We've given ourselves a chance but St Johnstone will be thinking the exact same.

"We've got big games coming up and a lot of challenges but you would rather have those opportunities. The players have been brilliant to give themselves this opportunity.

"We've got ourselves in the mix and the players feel there's more to come."