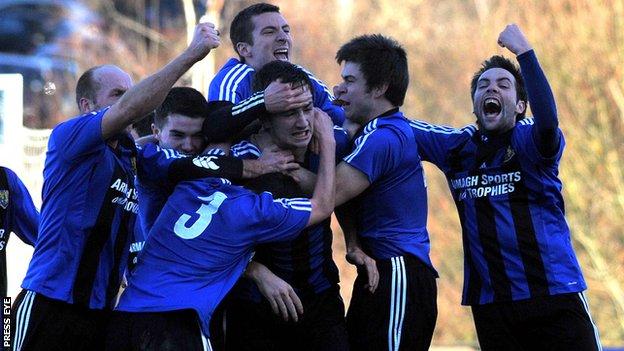 William Faulkner put Ards ahead on 12 minutes and the North Down club missed a number of other first-half chances.

Stephen Murray levelled for Armagh on 54 after a Liam Cullen header had come back off the woodwork.

Paul Carville's cross set up Ultan Lennon to nod Armagh ahead on 60 before Murray's penalty sealed victory on 84.

The defeat leaves Ards with only a battle for Premiership survival to play for during the remainder of this season and they will look back on several missed chances in the opening period.

Ards appeared on course for the sixth round as Faulkner put them ahead on 12 minutes after running on to a ball from Ross Arthurs.

Prior to the opening goal, Corey Davidson had been denied by Armagh keeper Sean Morgan and the Ards player missed a further first-half opportunity with Sean Cleary also going close for the visitors.

However, Murray was not to be denied in the 54th minute as he bundled the ball to the net after Cullen's header had been deflected on to the woodwork.

Ards were in trouble on the hour as Lennon's diving header flew to the net after Carville's delivery into the box.

The game was up for the Premiership outfit six minutes from time as Murray lashed home a penalty after Kyle McDowell had been adjudged to have fouled Philip Donnelly.