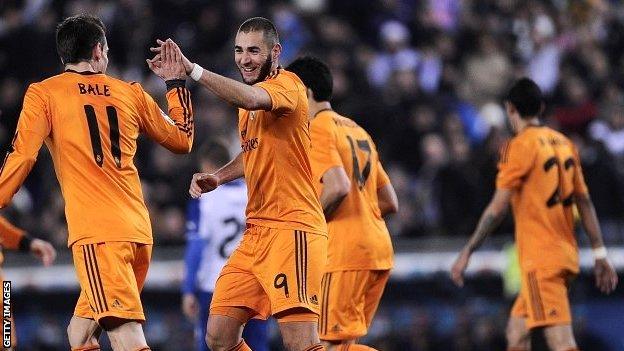 Real Madrid extended their winning run to eight games as Karim Benzema scored the only goal against Espanyol in their Copa del Rey quarter-final first-leg.

Bale provided the assist for Benzema's goal, flicking Alvaro Arbeloa's cross on for the France forward to head in.

Real Madrid's strike-force of Gareth Bale (10), Karim Benezema (13) and Cristiano Ronaldo (30) have scored a total of 53 goals for Real Madrid this season.

Real's last draw was against Osasuna on 14 December, while their last defeat came against Barcelona on 26 October.

Espanyol threatened to cancel out Benzema's 25th-minute opener early in the second half with Sergio Garcia curling just wide of Iker Casillas's post.

However, Real Madrid could just have easily taken a greater advantage back to the Bernabeu with Espanyol goalkeeper Kiko Casilla saving well from Arbeloa and Benzema.

The teams meet again on Tuesday, 28 January with Real, one point off Barcelona and Atletico Madrid at the top of the table, playing Granada at home in La Liga on Saturday.