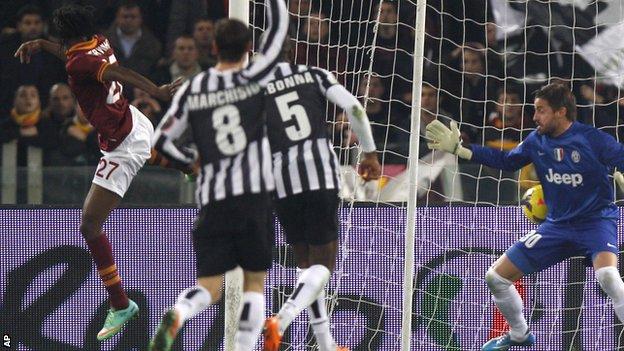 The ex-Arsenal winger acrobatically volleyed in the only goal after a sweeping break to see off Juve at the Stadio Olimpico.

In a game of few chances, Roma survived an early red-card appeal when Mehdi Benatia pulled down Sebastian Giovinco.

The victory sets up a two-legged semi-final with either Napoli or Lazio.

Despite this Cup success, Roma have only won three of their last 22 meetings with their rivals in Serie A.

It also restores a measure of pride for Roma who suffered a 3-0 reverse to Juventus earlier in January and now trail the Bianconeri by eight points at the top of Serie A.

Roma have dropped off the pace in the Italian top-flight after a record 10 successive victories at the start of the season took them five points clear at the top.

"We had to get our own back for the horrible defeat we suffered in Turin," he said.

"Today we showed ourselves to be at the same level as a very good Juve side."

In the other quarter-finals, AC Milan will look to continue their winning start under their former player and new manager Clarence Seedorf against Udinese on Wednesday, while Siena and Fiorentina meet in a Tuscan derby on Thursday.

Should Lazio beat Napoli on Wednesday 29 January it would set up a repeat of last year's final in which they beat city rivals Roma though Senad Lulic's goal.