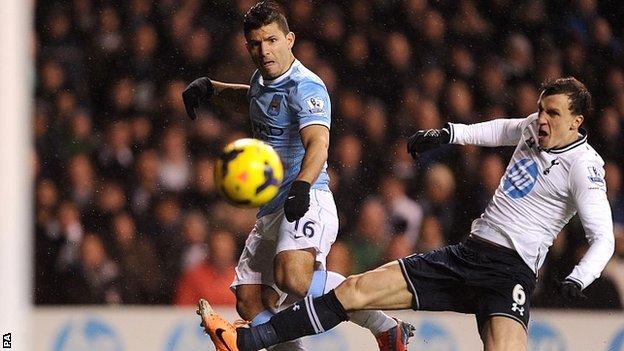 Manchester City moved to the top of the Premier League with an ominous show of authority against Tottenham at White Hart Lane.

Manuel Pellegrini's side required a win over Spurs to move a point clear of Arsenal, and the outcome never looked in doubt when Sergio Aguero scored in an eighth successive game to give them an early lead.

Yaya Toure doubled their advantage five minutes into the second half from a hotly-contested penalty after Spurs defender Danny Rose was sent off despite appearing to get a touch on the ball before being penalised for fouling Edin Dzeko.

Dzeko added a third and, even though Etienne Capoue pulled one back for Spurs, there was still time for City substitute Stevan Jovetic to score his first league goal since his £22m summer switch from Fiorentina.

And as the visitors inflicted further heavy punishment on Spurs following their 6-0 win in Manchester in November, captain Vincent Kompany rounded things off with a simple finish.

The only black mark on City's night was that Jovetic had replaced Aguero, who sustained a hamstring injury just before half-time and is now a doubt for Monday's crucial meeting with Chelsea at the Etihad.

That injury apart, this was a highly satisfactory night for Pellegrini with City's display confirming they are now the team to catch, not only at the Premier League summit but in terms of quality and performance.

They knew the prize on offer for a victory and produced a masterclass in the opening half-hour which could easily have seen the game won - with Aguero as the spearhead.

He set the tone inside four minutes when he showed pace and power to create space before striking the far post with Spurs keeper Hugo Lloris beaten, while Dzeko deceived Kyle Walker in the area but shot wastefully over the top.

The goal was coming and it duly arrived after 15 minutes, Aguero making it look deceptively easy as he converted David Silva's pass with an angled finish.

Aguero was proving impossible for Spurs to control and the Argentine's fine header from Gael Clichy's cross required a diving one-handed stop from Lloris to prevent City extending their lead.

He was the threat again when first his header from Silva's corner was cleared off the line by Rose, before the striker reacted first but sent a shot inches off target.

Spurs showed resilience to survive the Aguero-inspired siege and had a goal disallowed for offside when Michael Dawson touched in Christian Eriksen's free-kick.

City suffered a serious setback moments before half-time as Aguero, the star of the show, pulled up clutching his hamstring and was replaced by Jovetic.

Capoue replaced Mousa Dembele at half-time but Spurs' hopes of making a recovery were undermined by a highly-contentious moment after 50 minutes when Rose conceded a penalty, and was sent off, for a challenge on Dzeko even though he looked to have got a touch on the ball first.

Toure converted the spot-kick with ease and when Dzeko stroked in the third after Silva's shot struck a post, City looked home and dry.

Spurs showed some fight as Capoue scrambled in following a corner, which was the signal for Pellegrini to make a change, sending on Matija Nastasic for Toure.

Order was restored with 12 minutes left when Jovetic's shot took a deflection to beat Lloris and give the scoreline the sheen City's superiority deserved.

And with Spurs depleted and in disarray, and White Hart Lane emptying rapidly, Kompany completed the formalities.