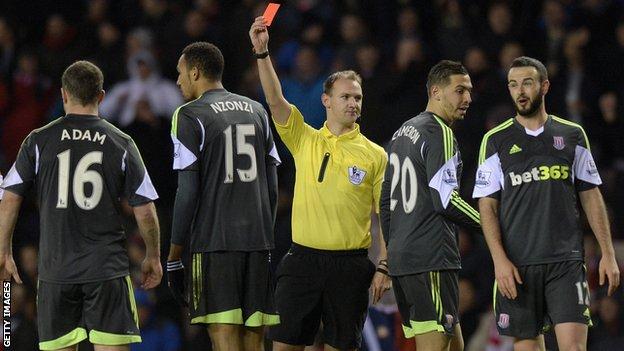 Sunderland moved out of the Premier League bottom three for the first time since August with a narrow win over 10-man Stoke.

Steven N'Zonzi was sent off for a second bookable offence eight minutes into the second half.

Stoke fought back with Ryan Shawcross hitting the bar, but the hosts held on.

The result saw Sunderland move above West Ham and Fulham and to within a point of Mark Hughes' side, although the Stoke manager may take some comfort from the way his players rallied after N'Zonzi's dismissal.

Ultimately, the Potters paid for their slow start as they allowed the hosts - buoyed by their recent Capital One Cup semi-final success over Manchester United - to dictate terms.

Sunderland's early fluency belied their position in the table, and they were good value for the lead after Johnson seized on Begovic's mistake to score from a tight angle.

But Sunderland's bright start petered out as Stoke gradually imposed themselves, and the home side were grateful for keeper Vito Mannone ensuring they were still ahead at half-time.

With Steven N'Zonzi's dismissal there have now been four red cards in the last five Premier League meetings between these two sides.

The Italian recovered after spilling the ball in a collision with captain John O'Shea to block Peter Crouch twice in a matter of seconds, then stopped a diving header from Shawcross.

Stoke continued to impress after the break until N'Zonzi received a second yellow card from referee Robert Madley after the midfielder pulled back Jozy Altidore just outside the area.

Sunderland immediately began to make their numerical advantage count, Altidore drawing a fine save with his feet from Begovic.

Johnson came close to adding a second when he rolled a shot across the goal and just wide of the far post, while Begovic pushed a long-range effort from Larsson wide.

However, Stoke increased the pressure on Sunderland and debutant Peter Odemwingie, who signed from Cardiff this week, wasted a chance when he shot straight at Mannone.

Shawcross came the closest to equalising after a sustained spell of pressure from the away side, hitting the bar with a looping header in the closing minutes.

"We were under no illusions that they would have spells where they would put us under pressure, but we held out for the majority of it. We knew they would throw everything at us, and men had to be men.

"We played a little bit into their hands - we did not look after the ball as well as we did in the first 25 minutes - but there was so much pressure for us to get out of the relegation zone that we desperate to hold out.

"Thankfully we got the points and hopefully long may it continue that we keep to pick up more points."

"I thought the lads were absolutely magnificent today. Sunderland had 10 to 15 minutes in the first half when we conceded and they had a lot of possession, but I thought from that point onwards we were magnificent, and with 10 men.

"The effort and desire to try to get back on level terms was outstanding. Unfortunately at the moment we are getting decisions against us, and we are disappointed again by the referee's decision.

"We feel the lad went down too easily - it is difficult for referees, he has bought it. But it is very harsh on us."