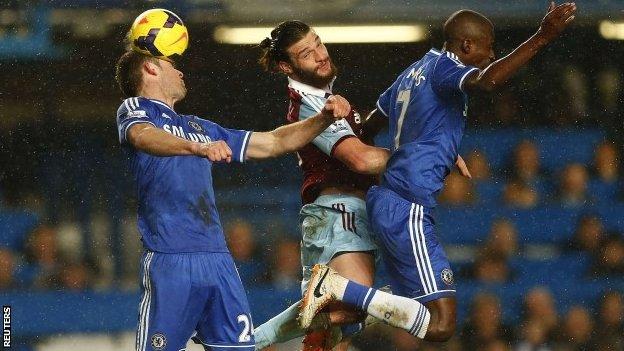 Chelsea slipped up in the race for the title as they were held by a dogged West Ham at Stamford Bridge.

The Blues controlled the match but were frustrated by Sam Allardyce's lowly Hammers, who defended stoutly.

Oscar had a shot touched onto the bar by Adrian, who also kept out efforts from John Terry and Samuel Eto'o.

Eto'o thought he had scored late on after assuming the West Ham keeper had wrongly placed the ball for a free-kick, but his effort was disallowed.

That was one of several frantic moments in the last 10 minutes for the visitors, with Frank Lampard forcing Adrian to make a superb save with his feet and another Blues substitute, Demba Ba, hitting the post with a flicked effort.

The result meant the Hammers avoided their 14th defeat in 17 meetings against Chelsea, but they remain in the bottom three.

The hosts, meanwhile, stay two points adrift of Arsenal, who drew with Southampton on Tuesday, but are three behind Manchester City, who went top with a 5-1 win at Tottenham.

If they are to have any hope of winning that game, Jose Mourinho's attackers must rediscover the killer instinct they were lacking against West Ham, who had conceded 17 goals in their previous five matches.

The visitors showed greater resolve in west London, although it was striker Andy Carroll who was their best defender.

The 25-year-old, making his first league start of the season, was regularly well positioned when Chelsea threatened with set-pieces, but spent more time in his own box than the opposition's.

The hosts dominated possession throughout, but only hit something near top gear towards the end of the first half, when Adrian made excellent saves to keep out Terry's header and Eto'o's fierce drive.

Prior to that, the Spaniard had tipped Oscar's curling effort onto the bar.

Despite their dominance, Chelsea lacked a striker hovering around the six-yard area, with Eto'o often dropping deeper in order to get involved in the build-up.

That pattern continued until the final five minutes, when Ba's close-range flick struck the woodwork.

Lampard also went close to a winner in stoppage time, but his side-footed effort from 10 yards was blocked by the alert Adrian, soon after the goalkeeper had escaped a potentially embarrassing incident.

Eto'o thought he had made a misjudgement when placing the ball for a free-kick and tapped into the net, but referee Neil Swarbrick disallowed the Cameroon striker's effort.