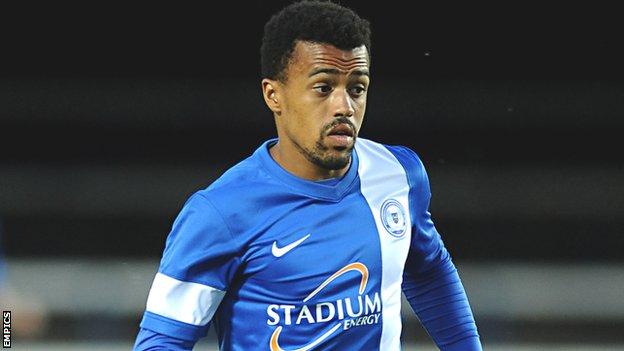 "He's been in and out and never really had a consistent run of games. I made my mind up when I brought him back from loan that I would give him a run."

Ajose, a former England Under-17 international, joined Posh from Manchester United in the summer of 2011.

But he failed to break into Ferguson's plans and has been loaned out to five different clubs over the past three seasons, including a spell at Swindon earlier this term where he scored 10 in 20 games.

On Saturday he notched his first strike for Posh in a 3-0 win over Tranmere and Tuesday's hat-trick means he has four goals from seven games for the League One side - over a 30-month period at London Road.

Peterborough have now won back-to-back games, with Ajose and strike partner Britt Assombalonga getting all seven goals between them, but Ferguson still hopes to bring in another forward as he looks to improve on their fifth-place position.

"I think they look a decent partnership them two," he said.

"The goals have given Nicky a lift. We've scored seven in two games and all from the two strikers. That's always good.

"We're still trying to get one or two in. That would involve one or two going out. We've put another couple of bids in and I think we've been slightly unlucky in the market."