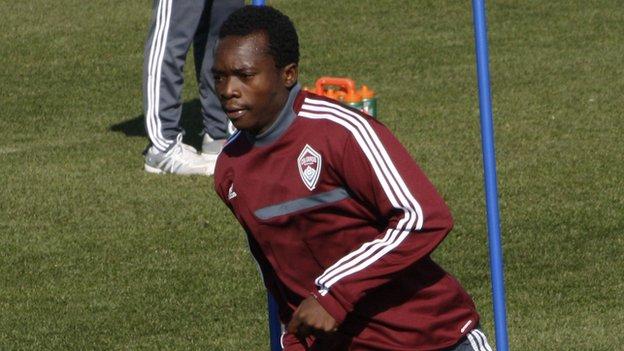 There then followed a tug of love between Cameroonian club AS Fortuna and the MLS team.

"I'm extremely excited to be joining MLS, it's a new adventure and I look forward to improving," he said.

Charles is a great young player with a lot of potential, and we got to see his skill in person at the very end of 2013

"I want to continue my development and hopefully do very well.

"I had interest from other countries but I sat down with my advisors and we picked Colorado because we feel it is the best place for me at this stage of my career."

Eloundou was registered with AS Fortuna but was then loaned firstly to Unisport Bafang and then Coton Sport, who refused to release him immediately.

Coton Sport only agreed to let him leave when they lost in the semi-finals of the 2013 African Champions League to eventual winners Al Ahly of Egypt.

The drawn-out saga attracted the attention of Fifa, who had been alerted to the stand-off by MLS, but Coton Sport refused to release Eloundou until they were ready.

Eloundou finally arrived in Denver on 23 October, but was ineligible to feature for the Rapids as a freeze on new players was in place.

His deal, which was initially a year-long loan, is now more long-term - pending an international transfer certificate.

Eloundou is on the fringes of the Cameroon national team having starred for the under-20s, scoring eight goals in seven matches during qualifying for the African finals in 2012.

He also played for the African Nations Championship side for locally-based players as they lost to DR Congo in the qualifiers in 2013.

His full international debut came as a substitute in a friendly international against Tanzania last February, when he played the final 20 minutes in a 1-0 loss.

"Charles is a great young player with a lot of potential, and we got to see his skill in person at the very end of 2013," said Rapids Technical Director Paul Bravo.

"This permanent transfer gives us another exciting, attacking player on our roster who can help both right away and in the future."

The Colorado Rapids return to pre-season training this Friday. Their MLS campaign kicks-off with a trip to New York Red Bulls on 15 March.