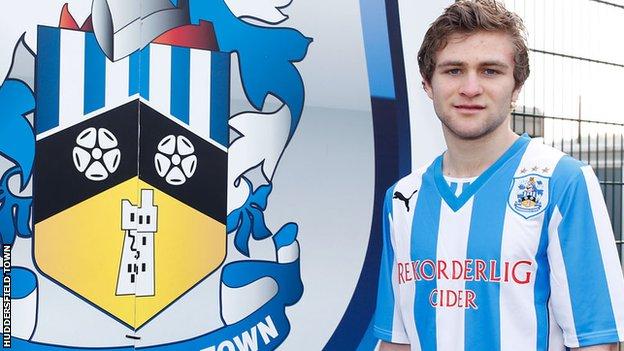 Huddersfield signing Sondre Tronstad is hoping impressing in the Championship will enhance his international chances.

But the 18-year-old former IK Start midfielder, who completed his move on Tuesday, knows he must first convince Town manager Mark Robins to pick him.

"Of course it's my ambition to play for my country's first team," the Norway U18 international told BBC Radio Leeds.

"If I can show my qualities in training I hope to make my debut [for Huddersfield] this season."

He added: "I'm a technical player who likes to have the ball and make runs to get the ball, and to pass it."

Tronstad did enough in a November trial at the John Smith's Stadium to convince Robins to sign him on a two-and-a-half-year deal, after his contract with IK Start expired.

The Yorkshire club also have an option to extend the contract by a further year.

"It's a big decision for me to leave Norway and it will take a while to settle down, but I'm really looking forward to it," explained Tronstad.

"Compared with Norway the Championship is bigger and better and I think it's a much higher tempo - but there are a lot of good players here, like Adam Clayton and Oliver Norwood, and every day I learn something new from them.

"I think it's a hard league with a lot of tackling, but I like the team's playing style and I feel that in time I will fit into this team, no problem.

"We've had a few Norwegian players succeed in England and it shows what hard work can do."