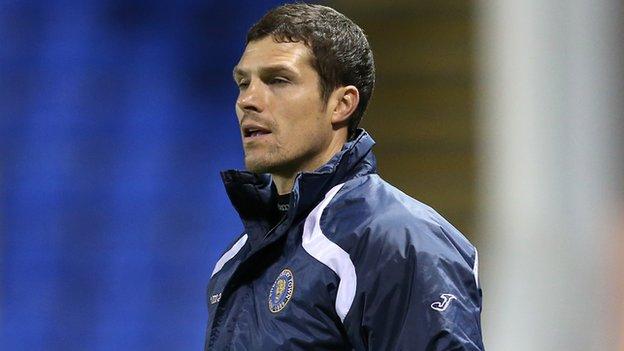 Shrewsbury Town have appointed Michael Jackson as caretaker manager for the next three matches, following Tuesday's departure of Graham Turner.

The 40-year-old former Crewe Alexandra, Bury, Preston North End, Tranmere Rovers and Blackpool defender has been with Shrewsbury since signing as a player in 2008.

He then joined the coaching staff when injury forced him to quit in 2010.

Town have also confirmed the departure of John Trewick and Tony Ford.

He then followed him to Shropshire as senior coach when Turner was appointed in June 2010.

Former Commonwealth gold medal-winning weightlifter Ford, 74, also worked with Turner at Hereford, before being brought to Shrewsbury by his old boss in 2010.

"John Trewick and Tony Ford have left the club," read a club statement. "We wish to thank them for the sterling work they have put in over the past three and a half years in support of Graham, and wish them success for the future.

"No further statement from the club is expected to be made on this matter until we have resolved the manager position."

Jackson's three-match stint in charge starts with this Saturday's trip to Swindon, a trip to Colchester next Tuesday night and the home date with League One high fliers Brentford on Saturday week (1 February.)

Jackson takes the helm with Shrewsbury now in the League One bottom four as a result of Crewe Alexandra's 2-0 home win over MK Dons on Tuesday night.