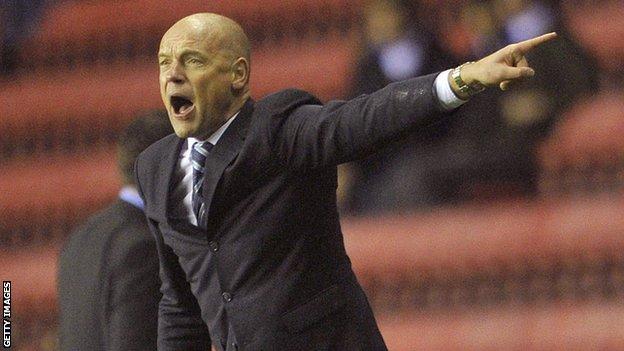 Uwe Rosler says he faces a "massive task" as manager of Championship side Wigan after being appointed last month.

The 45-year-old replaced Owen Coyle, who was in charge of the FA Cup holders for less than six months.

"As a manager, you cannot have long-term plans. I have been given the task of taking the club back to the Premier League in 18 months.

"When you get relegated from the Premier League, expectations will always be high," he told BBC Sport.

Rosler on the Dortmund influence

"I want to concentrate on quick transitions, quick attacking football with short, forward passes and lot so of attempts on goal. That is the way for the modern game.

"Teams in Germany, in general play, like that but especially Borussia Dortmund who have achieved success with that sort of football.

"They didn't have the most glamorous names in their starting line-up but got to the Champions League final and that speaks volumes.

"For Wigan, we can play successfully in a similar way."

The side have lost just twice in the German's first 10 games, and have progressed to the fourth round of the FA Cup, but they are only 11th in the Championship, five points outside the play-off places.

Rosler went close to promotion last season with previous club Brentford, who lost the League One play-off final to Yeovil.

He admitted it had been hard to leave the London club, but the chance to return to the North West, where he spent five seasons as a player for Manchester City during the 1990s, was too good to turn down.

"It was difficult for me to leave Brentford where I put something in place which is very sustainable for the next level," he said.

"There were different expectations there, but I am at a new club and you have to cope with that. There is a massive task, it is exciting."

The former East Germany international drew a parallel between his move to a bigger new club and David Moyes' switch from Everton to Manchester United.

Rosler - who described Moyes as a "great guy" - has had a less stressful start to his new job, but believes will succeed.

"I sympathise with David very much, he is a fantastic manager and will turn it around. It was a big task to take the job over after Sir Alex Ferguson," he added.