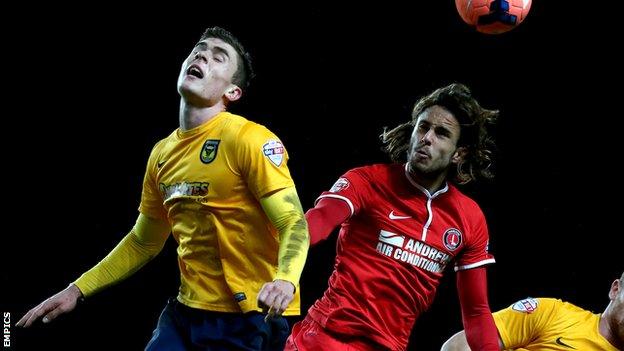 Charlton Athletic youngster Diego Poyet says making his first-team debut for the club will live long in his memory.

The 18-year-old midfielder, the son of former Chelsea and Tottenham player Gus Poyet, came on as a late substitute in Tuesday's FA Cup win over Oxford.

"It was a great moment and one I will never forget," he told BBC London 94.9.

"I have been at Charlton since I was 11 and I was very happy to come on the pitch. When the gaffer told me I was absolutely buzzing to get on."

He added: "I have worked with a lot of coaches and been here for many years. Every coach has played their part and helped me in a different way.

"At the moment I have got Jason [Euell, former Charlton striker] and he has helped me this year."

Gus Poyet scored 54 goals in 187 league games for Chelsea and Spurs but Diego has described himself as "more of a holding midfielder" than his father.

Diego says Gus, currently manager of Premier League side Sunderland, tries to give him advice in order to improve his game.

"He is really busy with his things but whenever I have got a DVD of the game I send it to him by email or whatever," he said.

"He tries to help me out. He is bit over-critical sometimes but he is my dad and only wants the best for me.

Diego is a player who I feel has a good career ahead of him. We want it to be here

"He doesn't like to compliment me too much and tries to keep me on it."

Charlton boss Chris Powell hopes the teenager is able to continue his development at The Valley.

"Diego is a player that caught my eye last season when he stepped up into the Under-21s," Powell told BBC London 94.9.

"He is a good user of the ball, a good passer, a good tackler and looks forward.

"He is a player who I feel has a good career ahead of him. We want it to be here.

"It is good to give him a taster of what it is like when we are not under pressure.

"I wished him well when he went on and said 'It is the start of your professional first-team career'. Let's hope it is the first of many."