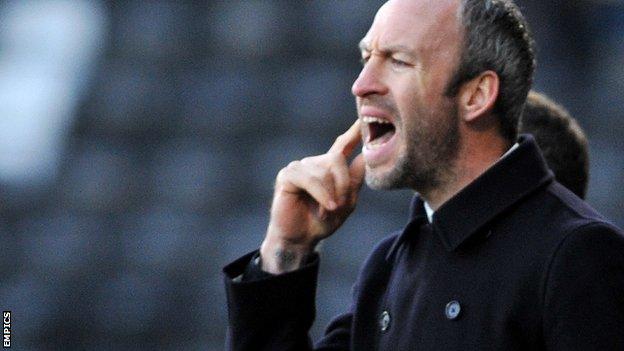 Shaun Derry says Notts County are almost unrecognisable from the team that were languishing in the League One relegation zone when he took over as manager in November.

Derry's 10-man side suffered a late 4-3 defeat at Peterborough on Tuesday, but remained a point above the bottom four.

"Everyone who has watched us in the last nine games can see we are a different team," Derry told BBC Sport.

"Our performances of late have been top drawer. We are different animal now."

The Magpies have won five of their 13 league games under Derry, having managed just three victories in their previous 15 fixtures.

When managers say they are taking positives out of defeats it winds me up sometimes because there are not many positives when you have lost a game, but now I know where they are coming from

"For that first two or three games I wasn't sure what I was getting. But they know what I want know.

"Confidence only comes with the performance levels and we have been matching performances with results."

Notts raced into a 2-0 lead against Posh, but then had striker Ronan Murray sent off.

They then trailed 3-2 but seemed to have earned a point when Jack Grealish levelled, only for Nicky Ajose to score the winner in the final five minutes.

"It could have been one more win [against Peterborough]," Derry said.

"It was absolute self-destruct of the highest order and one you cannot legislate for. It baffles me because Ronan is not that type of character.

"He is not that type of guy. All he wants to do is be in and around the first team and now he is out with a red card which kills the lads and kills him."

Derry was nevertheless upbeat about the performance, which he believes was every bit as good as the displays which earned three consecutive victories before the trip to London Road.

He added: "When managers say they are taking positives out of defeats it winds me up sometimes because there are not many positives when you have lost a game, but now I know where they are coming from.

"I am taking a lot of positives out of the game and take the positives into Saturday [against Walsall]."