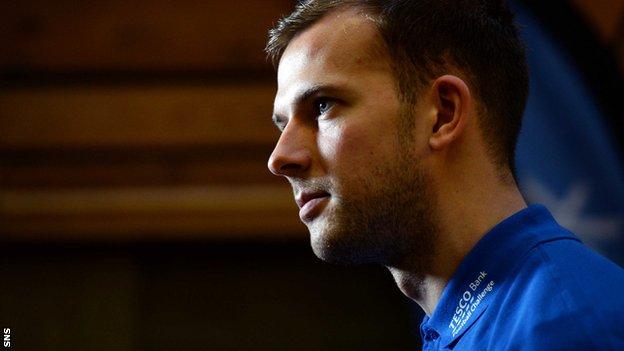 Blackburn striker Jordan Rhodes says he is "ready to go" as he waits for a possible Scotland recall for March's friendly with Poland.

The 23-year-old withdrew from the squad for Scotland's last three fixtures and his last cap came in September.

Rhodes puts his injury withdrawals down to "bad luck" and is eager to add to his 11 international appearances and three goals.

"The last time I broke my hand," he said. "That was just a freak incident."

Gordon Strachan's Scots having won three and drawn one of their last four matches.

And Rhodes knows regaining a place in the squad will be a challenge.

"I'll just try and keep working hard with Blackburn Rovers and hopefully, come March time when we've got the friendly against Poland, that can warrant a call-up," he said.

"[Competition] is very strong at the moment. You've got the likes of Leigh Griffiths scoring goals for Wolves in League One, you've got [Leeds United's] Ross McCormack and I know Kris Boyd's doing really well up here [with Kilmarnock].

"And that's not even taking Steven Fletcher and Steven Naismith into it.

"Competition is fierce and that can only be a good thing for Scotland as a nation. I think everything in 2014 will be geared towards getting the preparation right and getting ourselves in good shape, in a good mental state for the [Euro 2016] qualifiers in August, September time.

"It would be nice to get a little home fixture to get the Hampden crowd really up for what might be a special campaign and hopefully at the end of it going to a major finals. That would be fantastic."

In recent matches, Strachan has elected to play a lone striker like Sunderland's Fletcher or Everton's Naismith, while Rhodes is more used to playing with a strike partner.

Asked whether he was concerned about the system, he replied: "No, I don't think so.

"First of all I'm very proud and very honoured to get called up to Scotland full stop.

"Never did I think I would be an international footballer running around at school at seven years old, so to be called up is a real honour."