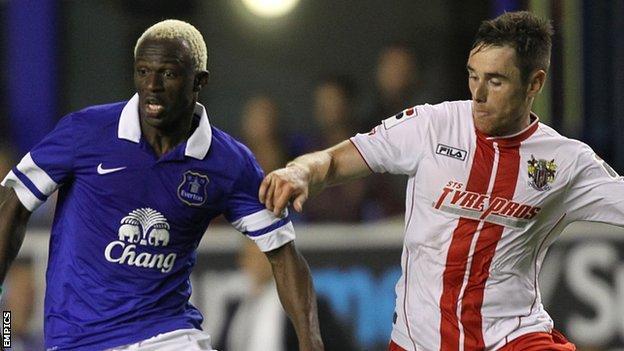 Roberto Martinez's Premier League side face the League One strugglers in a fourth-round tie on Saturday.

"I'm sure the Everton lads will go home on Saturday night feeling bewildered, because it's that kind of place," Westley told BBC Three Counties Radio.

"Hopefully that bewilderment extends to the result."

Boro's ground is dwarfed in size and capacity by Everton's Goodison Park, with a capacity of around 7,000 - around half of which is terracing.

And Westley believes the home fans can contribute towards a massive FA Cup shock.

"They know exactly what sort of environment to create to allow the players the best chance of pulling off the right result," he said.

"We know it's a difficult place to come to. It's a bizarre environment."

Stevenage have celebrated wins over big teams in the FA Cup in recent years, beating Newcastle in 2011 and then before in the same season.

And Boro, who were a non-league side in 2010, have came close to beating the Toffees once already this season, in the League Cup in August.

"You never know on the day, you might get it right," said Westley.

"The big factor is it's here, not there [Goodison Park]. This will be a bizarre environment for them to come to."