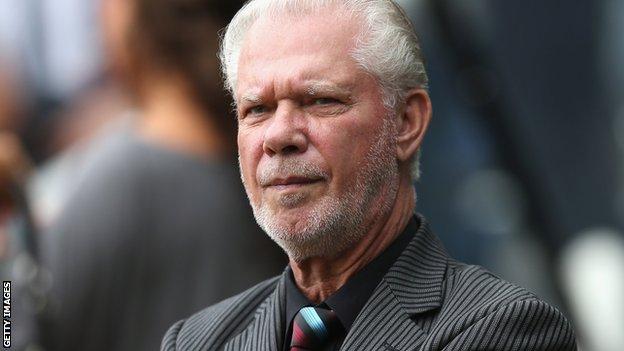 West Ham co-chairman David Gold says his club are at "a low point" in their history and face a "tough battle" to stay in the Premier League.

West Ham were beaten 9-0 on aggregate by Manchester City in the Capital One Cup semi-finals and are 18th in the Premier League table.

We know Sam has not lost his ambition or desire

"We must regroup and prepare for a tough relegation battle," said Gold, 77.

"[But] players are returning from injury and together we can survive."

Gold added on Twitter: "We are out of both cup competitions having been beaten 5-0 and 9-0 - this is a low point in the history of our great club."

Sam Allardyce's side have lost seven of their last nine matches in all competitions and have won just four Premier League games all season.

Gold and his fellow co-owner David Sullivan issued an open letter to fans in support of boss Sam Allardyce following the 5-0 FA Cup defeat by Nottingham Forest and they are continuing to stand by their manager.

Striker Andy Carroll made his first start of the season on Tuesday, after nearly eight months out with a foot injury.