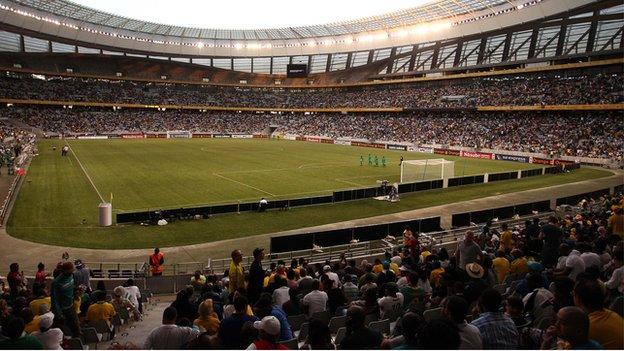 This year's African Nations Championship has surprised many sceptics by delivering a higher standard of football than might have expected from teams containing only home-based players.

While there is obvious and widespread disappointment that hosts South Africa have been eliminated in the group stage, there is reason for optimism that the tournament will still attract interest and large crowds for Saturday's quarter-finals.

The immigrant communities, particularly those from Zimbabwe and Ethiopia, have created a colourful and vibrant atmosphere inside the stadiums with the help of the famous singing fans from Bloemfontein Celtic

And although there has been some very ordinary finishing by many of the teams - Zimbabwe and Morocco in particular have missed some easy chances - the quality of play has impressed many coaches of the participating teams.

"The standard has been good. I saw Uganda play and they were good and Libya were not bad either. The quality of the championship is not bad at all," said Nigeria coach Stephen Keshi.

"By playing at the tournament the players can benefit; they could be discovered by scouts and end up going to Europe, and they can also play their way into the senior national teams.

"I think there's a lot of value for the home-based players in this tournament. A coach could easily add two or three players to his senior team," Keshi added.

Zimbabwe coach Ian Gorowa, himself a former international striker, also hailed the value of the tournament.

"You should salute the Confederation of African Football for giving the locally-based players the opportunity and the level of competition which they wouldn't otherwise have had.," he said.

"If you look at the performance of most of the teams at this tournament, it shows how much football has grown in Africa.

"CHAN is also a good breeding ground for players to come through and get the international experience which will help them step up to the next level. It will certainly help me broaden my base for the Africa Cup of Nations qualifiers."

The tournament has showcased a number of talented youngsters who could soon become household names on the African continent if they realise the potential they have shown at CHAN.

In addition, the decision of football's world governing body Fifa to recognise the games as 'A' friendlies, which carry ranking points, has also added a new significance to CHAN.

It should ensure that countries take the event more seriously in future.