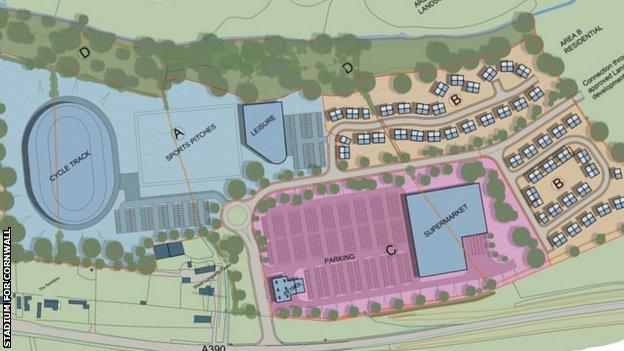 The long-awaited Stadium for Cornwall project could be back on, funded by a new supermarket, petrol station and leisure facilities.

Development company Inox already has outline planning permission to build a stadium at Threemilestone near Truro.

Inox has now secured an option on an additional 35 acres of land adjoining Langarth Farm.

The company says money raised from a commercial development could fund the building of the stadium.

The proposal has been on hold since 2012, when councillors voted against providing £10m of public money towards the project.

"The only thing that can get us where we need to be in terms of the super profit from a project would be a supermarket because they pay by far the best values," Inox managing director Rob Saltmash told BBC Radio Cornwall.

"We have had discussions with commercial developers. The idea is to provide the capital cost from potentially a supermarket and then the uses around that facility could help to enable funds to be raised to run the facility in the long term.

"Phase one would be the supermarket because that provides the necessary capital costs and then phase two hopefully would create a sports hub. It could involve a cycling track, BMX, off-road mountain biking, leisure and various other facilities. It would be dependent on grant funding."

Both the Cornish Pirates and Truro City Football Club have expressed an interest in relocating to a new stadium.

The Pirates, who are in English rugby's second tier, need a venue capable of holding at least 10,000 supporters in order to be eligible to play in the Premiership.

"Without such a facility, the Pirates are unable to move forward in their quest to improve sporting standards in Cornwall and especially on the rugby field," said Pirates owner Dicky Evans.

"It is galling to see local players continue to move out of Cornwall to improve their prospects of top-class rugby and this talent drain can only be halted by the provision of such a facility.

"We have worked with Inox for several years and have reached a point in planning and development whereby the funding of this facility is the only real roadblock left, and we are pleased to see the ongoing efforts being made to attract private-sector investment to ensure that the project can proceed."

Truro City are hopeful of moving to the stadium, but there are currently separate plans for a retail development at the club's Treyew Road ground.

Development company Helical Bar are working up proposals and are in talks with Cornwall Council, with a planning application expected in the spring.

Truro City owner Peter Masters says they could still potentially move to the Stadium for Cornwall but is worried about the amount of development in the area.

"We talking figures of up to £4m which Helical Bar could well put in to the stadium project, if they get planning for a supermarket on the Treyew Road site.

"It's another 35 acres. Can you imagine a 10,000-seater stadium, plus a major supermarket and houses? It's just one development too many."

Inox said the funding options would be a lot clearer in the coming weeks and it would look to hold discussions with Cornwall Council, the Pirates, Truro City and Truro and Penwith College, with the aim of submitting an enabling development planning application in the spring of 2014.